Well, the cold winds of the north are with us, finally, and it’s time to dust out the fondue pot, locate the matches, and glue the fondue forks back together. Much like BBQs, Swiss fondues seem to be a man’s job. This must have something to do with a genetic throw-back to the Stone Age Alpine cave, a dead mammoth, and a roaring fire.

Sadly, today’s fondue fire has been reduced to a little aluminum cupcake tin filled with blue jelly. The exciting potential for burning down the house is much reduced.

A fondue outside Switzerland is just not the same. Whether it is the cheese, the wine, the bread, the stirring spatula, or the weather, it is a weak imitation of its big Swiss sister. I have an English cookbook that lists milk as one of the key ingredients. Say no more.

A fondue is all about attitude and ritual. It is considered a highly nutritious, celebratory dish. There are no guilty qualms concerning gluten, cholesterol, dairy fats, or alcohol. The event is embraced with gusto and the white Swiss wine, Fendant, flows freely. Kirsch is actually a medical necessity to avoid the formation of the dreaded cheese-ball. 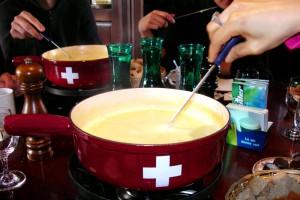 Losing your piece of bread in the pot is a cause for hilarity, and getting a bit of the burnt cheese at the bottom is a solemn honour. It takes years to learn all this, and get the fondue patter smooth.

There is the first fondue of the year and the last. There are the small personal touches concerning the cheeses involved, the use of binding / fluffing agents, the amount of kirsch, the (highly controversial) offering of pickles and/or dried meat.

My own personal fondue tip involves a St Bernard dog’s licking out the pot at the end which cuts down almost completely on the washing-up process. And in this house the bread (pain bis) is carefully cut into perfectly mouth-sized morsels. Plus, the very idea of adding mushrooms or dried tomatoes is greeted with cries of derision and revulsion. Our fondues are pure.

Our grand-daughter, normally Swissly constituted in every other way, has not yet developed a taste for fondue. Last Christmas we found a miniature fondue set specially conceived for that most radical of fondues – the chocolate fondue. Carefully wrapped, it was presented to her grandfather and has been peacefully been slumbering in its wrapping ever since.

I have yet to find the miniature marshmallows. 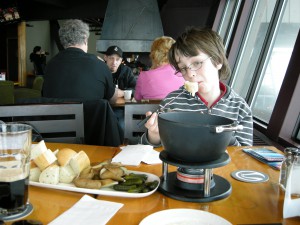 A young Canadian enjoying a fondue on Grouse Mountain, British Colombia. Note the too-large bread pieces, the boiled potatoes, the pickles, and that glass that looks suspiciously like root beer.