I have a young sharp-eyed stringer who lives by the Welland Canal that connects the Great Lakes of Erie and Ontario. The Regional Municipality of Niagara is situated in southern Ontario, Canada, right on the American border. This area is not to be confused with the Greater Niagara Region of New York. Not even close.

Probably due to such regional proximity – not to mention the long-standing rivalry of the American and Canadian bits of Niagara Falls–all things military are of vital interest.

Now, we might never know why he was obviously surfing women’s underwear sites, but let’s just say he came across the Swiss newsflash by accident.  Starting this month, female recruits in the Swiss Army will have their own (female-shaped) underwear. There will be two sets of underpants—no legs for summer duty, and long legs for winter. The upper-body garment seems to be a state secret.

Now I have it from rock-solid authority (Swiss ex-army man, Corporal, Artillery) that there is no rule that you HAVE to wear Swiss army-issue underpants. He, for example, never did. No one checks. 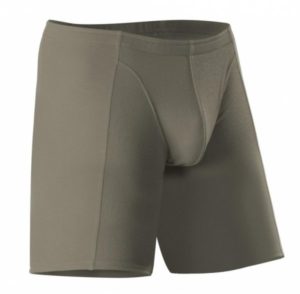 You could bring your own favourites from home and were even provided with a special little canvas bag that you mailed home once a week filled with army-ravaged socks and underpants.   One’s mother would then take over and do her bit: washing, starching, ironing and sending back to boot-camp (postage-free) the newly-fragrant items. Usually a Toblerone chocolate bar was added to keep up morale.

However, genuine army-issue underpants have always been available. What has previously been handed out was simply XXXL men’s underwear. From what I see of the skinny little recruits on patrol from time to time in the Geneva countryside, they could probably wear these clothing items, fashionably, on the outside of their uniforms.

But we move with the times here in Switzerland, and our Shakespearean Defence Minister, Viola, is a woman. On International Woman’s Day of this year, she announced her desire to see an increase in female army recruits from the less than 1% at present, to 10% within the next decade. To aid in her vision for the future she also announced the new Swiss Army Underwear Scheme. It has been specified that the new underwear will meet the specific needs of women and that the ergometrics of the female body will be taken under consideration.

Well, THAT should pull them in.

As all international news articles have been pointing out, men and women in the Swiss Army have had the same duties since 2004, and whether crawling in a muddy ditch with a 27kg pack on your back or sitting at a desk all day, bunched-up underwear could put you right off.

So, we’re hoping that positive reports are going to be available soon. We’ll keep our eyes peeled and our fingers crossed that the new gotchies are snug and comfortable.