In these turbulent and emotionally-charged pre-Christmas days, it is of utmost importance to remember to breathe, to take time out to relax, and to pay attention to your mental and physical welfare.

It is a well-known fact that just one Christmas cookie, one Christmas Newsletter or one eggnog too many can tip you seriously over the edge into a seasonal malady that we mental health professionals call Sage-Stuffing-Brain. To try to prevent this, take a minute to answer the following questions, and see just exactly where you stand in your relationship to the festive season. 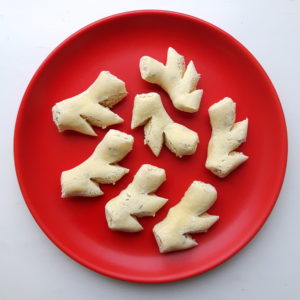 Good Luck with all of this, and Merry Christmas!

The old wooden cattle shed has been hauled up from the bomb shelter yet again. The Fimo figurines, the originals fashioned thirty-some years back, unrolled from their newspaper wrappings. The horse is missing a leg, and the pig an ear. The dog had to be discarded after his head got knocked off last year. Baby Jesus was baked right into his basket, so is gloriously intact. His parents look proud of the meek and mild one-eyed infant that is about the same size as they are.

Over time, there have been energetic modelled additions—teddy bears, ducks, and palm trees—all adding to the gaiety of the occasion. There are nicked and scarred porcelain geese and farmyard cats. An elephant on wheels. Yonder Star and a blond angel are suspended in the silent night.

This is the family Christmas crèche and the grandson played with it recently on a cold dark advent day.

It started with the roof. After having ascertained that here in the Geneva countryside our roof would make a perfect landing spot for Santa and his sled full of gifts, he explained that back home in town they would have to lower a rope ladder down from their apartment balcony for Père Noel to climb up. The reindeer team would wait patiently in the parking lot.

He is three, and the logistics of potential presents is important.

After forcefully evicting the traditional tenants and their animals from the nativity scene, he declared that the structure was to be turned into a dinosaur house.

The Tyrannosaurus, Brachiosaurus, and Raptors were all placed on the roof of the shed and roared before they gobbled up approaching Lego children, innocent zebras, circus clowns and even Bambi. Dinosaur battles and massacres and feasts all raged in a tourbillon of primal energy. Dinosaurs became birds before their time. Donder and Blitzen were shaking in their boots and Rudolf was nowhere to be seen. 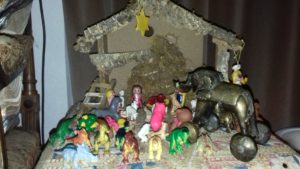 …Here there was an intermission and macaroni and cheese was served. Conversation consisted of the fairly well-worn theme of the difference between an “accident” and an act of downright evil mischief. Philosophic harmony was temporarily re-established…

As the day rolled on, the dinosaurs were spontaneously banished to the ends of the earth (under the pillows of the couch). Baby Jesus was reinstalled and farm animals collected and placed on the roof. The baby’s parents showed up and cows gathered around. The little elephant rolled in underneath its mom.

The rug was rolled into a tunnel and the now peaceful dinosaurs paraded through to arrive at the edge of the all-is-calm / all-is-bright world. Jingle Bells was sung with an appalling French accent.

The day finished with the placement of the dinosaurs. It was declared that the dinosaurs were there to protect the Christmas house and placed around the edges in a pattern of stalwart defense and brave patrol.

May all your dinosaurs be bright!