It is never our fault when our rental car gets damaged. Often it has to do with the indigenous population who, through sheer ignorance, lack of education and cultural isolation, do not speak our language. Plus, they are often driving on the wrong side of the road.

The shocking local terrain is also to blame. Inviting dotted lines on maps should really be closed to normal traffic, and the little plastic tapes attached to flimsy poles to discourage road use should be replaced with something more substantial.

Years back, driving a rental over the Beartooth Mountain Pass into Yellowstone Park the tearing and scraping noises coming from underneath the car as we rode through the potholes were most disheartening.

Then there was the afternoon on a short-cut down from the top of a beautiful mountain lookout in Corfu. The road was simply too narrow and the razor-sharp gorse bushes scratched and etched huge cuts into rental’s originally glittering paintwork.  We passed the burned out shell of a car (a rental?) about half way down.

In Japan, they refuse to rent their rentals to foreigners. They are entirely right. However, a morning’s perseverance in Otaru got us a miniscule little car about the same size and with the same technical skills as a Japanese Toto Washlet toilet. 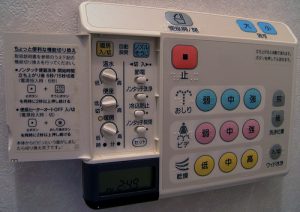 We squeezed ourselves in and with the engine making a high-pitched buzzing noise, drove a couple of hours to a tourist site where the earth’s crust was about half-an-inch thick. There were crooked buildings, broken roads, and bridges going nowhere. Fumaroles were going off left and right. Your shoes got hot and started melting. It was all very exhilarating.

We were so excited that we almost missed the turn off, and, pulling a sharp left, touched the curb. The tire, which was about the size and strength of an aluminium disposable pie plate, exploded.

There was a saucer-sized spare wheel, but no jack. As I was making my way back across a field with a rock to place under the car a nice man slowed down and offered us his “Jakko”. Blood, sweat, tears, and a visit to Doctor Drive got us out of that particularly hot and sticky situation.

Recently, rental companies are getting both smart and lazy. Why waste a perfectly good tire as a spare? In our last rental in Rhodes a couple of weeks back, there was just a can of foam goop to squirt into your flat tire (which we did).

And Canada has taken things to an entirely ethereal level. While adjusting the rear-view mirror in a Chevy rental in September, a miniscule red button inadvertently got pushed. Five minutes later, a disembodied voice invited us to share our problem.  I instinctively played dead, but my sister gamely piped up and informed the air inside the car that we were all just fine.

And so, we drove on.