We were just drying out from the great European rains of July and all the doors were open and the zephyrs blowing through the old French farmhouse.  I had located a three-day old international newspaper (red-hot item here in the slow-moving mountains) and was deliciously settling down to sharpen my wits around nefarious world affairs concerning COVID19, the Taliban and people shooting themselves into space, when there was a truthful-sounding clarion call from the upstairs: “There’s a real horse in the house!”

Now, over the past decades, we have had many unwelcome things showing up in the Shack. There were the burglars (rechargeable batteries and cat food), the vandals (all glass shattered except mirrors), a 10-ton pine tree, lightning, an owl, dormice, hunting dogs, a religious nutcase and the Dame de Versailles. But a horse?

The one actually inside was white and brown and had three friends outside politely hiding behind the forsythia bush.

Now, to put it mildly, I am not a horsewoman. I am the opposite—a horse-sceptic—due to a series of childhood horse-traumas. The first I recall must have happened when I was about 3 or 4. My father, newly arrived from England, worked on farm with racing horses. According to my nightmares, I was put on the automatic feeder belt along with hay and other goodies and the adults thought I was a cutie-pie and I thought I was going to be gobbled up by the huge horse monsters. 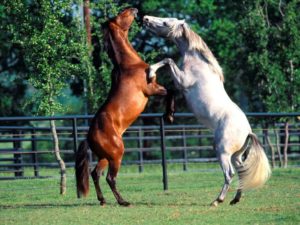 I have feared them and their great yellow choppers ever since.

This was followed by southern Ontario birthday parties which, as an extraordinary treat, sometimes featured pony rides. I returned blinded and humiliated with allergies and usually had to go home without any cake.

Then there was the terrible story of Black Beauty that forced me to feel sentimental anguish for animals I loathed.

Fortunately, the Shack horses agreed to being treated like cows (with which we are familiar). A cow stick and strange Swiss cow-noises got them going down the mountainside towards civilisation.  They did look confused, knowing that horses should be lead with calm dignity, rather than being driven with air-flailing batons. Reluctantly, they trudged down, one putting a big fat pudding foot through a board in the lower bridge.

Hitting a spot of rich pastureland they stopped in their tracks and began to feast. They calmly rolled their big gloopy horse eyes at us and our silly sticks and didn’t move an inch. Chewing became the centre of their lives.

Absent owners were localized (milking goats up another mountain), neighbours in the hamlet had their suppers disturbed and the local fire department called out.

Obviously used to such incidents, they had a pair of bridles and a bucket of horse treats. We retired, older, but wiser, back up the mountain. Unlike the burglar, though, the horses had left us a treat. A big pile of rich horse poop has been shared between the apples trees.