Well, you do everything you can. You sort your garbage, you compost your old peanut butter sandwich crusts, you wash your windows with Swiss do-no-harm-vinegar, you drink the hot smelly summer water out of the tap, you fight legal battles to try to get solar panels on your roof, you shop at the local farmer’s barn, you walk the three miles to the post office as the one in your village has been closed, and you still get into trouble.

There I was with my miniature garbage bag containing perhaps one multiply-used paper towel that could not be flushed down the toilet, on my way over the road to the garbage container when a big, silent, speeding, entitled, disdainful, white electric car came within a hair’s breadth of flattening me. Didn’t even slow down.

You will be happy to hear that I am NOT singing duets with Aretha and/or Elvis, but it was a very close call. I know we’re all supposed imagine a dreamy future of quiet roads and pollution-free electric cars, but I am suddenly scared.

In the beginning the road had two lanes, a couple of modest speed bumps, and cars had purring engines.

In the field over the road there were black-faced curly-horned sheep that could be happily fed my hedge trimmings. We worked in perfect harmony. These were my very favourite summertime neighbours. No radios, no snarling dogs, no complaints.

The friendly, useful sheep have been replaced by layers of apartment buildings. The latest one—long, grey, and ugly—is situated right smack on the edge of the road.

Once installed, the people who moved in were quite surprised to find that there was a real road RIGHT THERE outside their bedroom windows! Part of the road has now been turned into a sidewalk (specifically for their “security” the town hall has said.) The tiny bit of the road that’s left (impossible for two cars to pass) has been paved with a magical product that sucks in car noise.

Now you combine all of this with silent cars that people are proud of owning and quite excited that such an ecological product can accelerate so magnificently and go very very fast indeed, then you have a silent problem. Add to the silent automobiles, the speeding silent electric bicycles, and the latest rage that is filling the world with silent electric scooters, then you have a very very big silent problem.

Silent Spring was published one day after my 10th birthday. In it Rachel Carson, in a very calm and competent way, exposes how the indiscriminate over-use of the pesticide, DDT, in North America wiped out birds and insects and the countryside fell silent.

Same thing still happening. We, the lowly pedestrians, have become the birds and the bees. The quiet electrical torpedoes will get us unless we’re very very careful.

Time for us to scream and shout.

Well, yesterday featured the dreaded MRI (IRM) check-up. Yes. The day they lock your head in a cage and blast it full of magnetic things, and somehow manage to put pictures on computers that other people look at.

The hour-long repetitive booming noise has a definite rock-concert edge to it. My head being full of Aretha Franklin tribute tunes, at one point I found myself humming R-E-S-P-E-C-T, but I don’t think anyone except the technician heard.

Anyway, I am pleased to report some startling changes at the main Geneva Hospital.

First of all, they don’t like patients coming early and sitting in waiting rooms anymore. This might be explained as an attempt to avoid getting ill by breathing killer hospital germs, but really it is because there is a lot of loose staff that don’t have chairs behind counters to sit on, so they like to sit in the little waiting rooms and chat.

The friendly receptionist sends you, the patient, up to the Hospital Garden on the first floor, extolling its pleasant atmosphere and shady, breezy spaces. You are warned not to fall asleep and to back on the dot of your allotted machine-tube torture time. 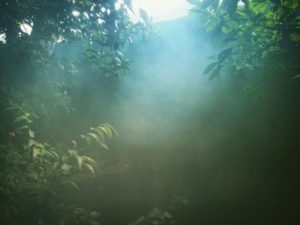 Well, there were some little trees in the garden, but there was also a definite California forest-fire edge to things: The entire hospital staff was out there smoking. There was no wind to blow off the thick, stinking, grey cigarette-smoke cloud.

Unfortunately, conversations carried razor-sharp through the tobacco fug, and my innocent, apprehensive ears heard about intubations, operations, and the hideous medical surprises that had enriched everyone’s morning.

When some rather poorly patients arrived in wheelchairs with oxygen bottles attached, and pulled out their cigarette packs, I felt it was really time to go.

Another great change is that you get to see your specialist on the exact same day as your examination. For this, you are allowed to sit in the waiting room, but only because HE is late and you are NOT early.

Unfortunately, the neurologist arrived before I could finish watching the bit about how, these days, there are medical interventions (operations with real scalpels) while you are inside the machine. I did, though, catch the bit about there being no anaesthetic and their huge success rate.

These medical information videos replace the old nature documentaries where you could see lions jumping on wildebeest and eating them alive before the hyena and vultures came in to finish off their brains and eyeballs.

I hope to be able to report future hospital entertainment improvements in exactly five years’ time. All suggestions welcome.

Well, today is August 2nd, and the glorious 1st of August has been survived yet again. No missing eyes, fingers or pockets. No one has been reported as dying from boredom during last night’s presidential speech. And although no birds have been seen flying in the garden yet today, I’m sure they’re just having an “off” day and will all be flitting about normally tomorrow.

Swiss National Day is defined by an evening communal meal, a children’s lantern parade, a firework display, and, finally, an enormous bonfire. Considering the hot, dry summer conditions this is a tricky business. Volunteer firemen stand importantly about. However, firework size and quality is the yardstick for measuring the amount of Swissness a community holds.

True fact: 3,000 tons of explosive material and 1,700 tons of fireworks are used in Switzerland every year. 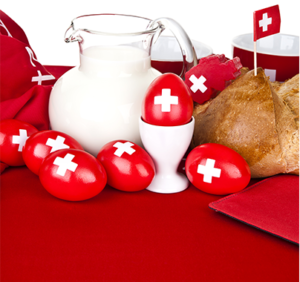 The first of August morning always starts with a few isolated bangs. These are either children or fathers who have no willpower to wait for the darkness and just test-try one or two big crackers to make sure they will be fine for later. For the past month, all shops have been filled with August 1st paraphernalia—Swiss and cantonal flags; paper lanterns; bangers and packages of fireworks; glasses, plates, napkins, balloons and hard-boiled eggs with Swiss crosses on them.

Later in the day, it is like an eclipse of the sun, as the world goes quiet. All families lie down for a jolly good afternoon nap to make sure that eyes are bright and reflexes sharp for the upcoming pyro-show.

Towards the evening the smell of roasting wieners and cervelas fills the air, along with conversation and laughter. Little bangers go off. As the beer and wine flow, there is animation in the air.

At dusk distorted music floats over from the football field behind the town hall where the bonfire is stacked 3-metres high into the sky. Loud hailers shout unintelligible words.

Cars begin flocking in from over the border looking for non-existent parking places (they are at the other end of the village in a stubble field). Someone stops to pee on your hedge as he thinks no one is looking. The excitement builds.

Surrounding, higher, villages begin early, and from the upstairs window you see the two separate and glorious pyrotechnic displays. Then suddenly overhead there are the three sonic booms, and way high over the roof giant  multi-coloured showers rain down. There is a pause between the “phoof” of the missile, and the explosion of fire in the sky. Sparks sprinkle down, but dissolve before they catch your hair alight.

You watch until your neck hurts and with a louder than loud bang it is all over for another year.

This morning there was just the wisps of smoke from a huge heap of grey ashes and three lone cars left in the stubble field.

All is well in Switzerland.