My attention has been drawn to the fact that you are currently searching for bold new projects to help you quickly rebuild your church that burned down last month. As you have not contacted me directly, I thought I’d pitch you my ideas as I’m sure that you’re a fan of Swiss newspaper blogs and like to keep your English snappy (unlike our unfortunate Swiss president.)

Notre Dame de Paris is an old-time favourite in our family. My sister once stayed in a little fire-trap hotel that looked directly onto it and got some fantastic photos. And here in Geneva, of course, our very own St. Peter’s Cathedral is also filled with bells and timbers and also has a 19th-century Gothic spire. We feel a very special connection. 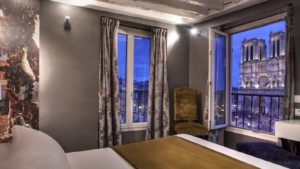 My personal qualifications as advisor in this matter include the following: I have suffered shocking architectural calamity; I grew up in churches; and I happen to know a lot about roofs.

About the initial shock, try to stay calm and get the very best local workers lined up. In our case, we immediately called Frank and Patrice when the log pierced our house in the Haute Savoie. (You might have heard about it, it became quite a cause célèbre in the Vallée du Giffre.)

Anyway, the mess stayed in situ for many months as the insurance companies had to figure out who was to blame. I certainly hope you had insurance for your cathedral, as did the person who inadvertently started the fire (in our case it was the loggers who had piled unsecured logs up the mountainside.) Mostly, insurance companies do not want to pay anything and try to claim that the accident was an act of God. In your case they might have a point.

About church knowledge, as a preacher’s kid in Canada, my Sundays were spent listening to Bible stories. So the proposition of a new spire being a carbon fibre and gold leaf permanent flame symbol is a really bad one. The most exciting Biblical flames are the horrifying, tormenting eternal flames of Hell. And they are really quite depressing when compared to the glorious and positive power of the sun.

Which brings me to my roof-knowledge which has been born out of our long political battle to get solar panels on our roof here in the Geneva countryside. We have finally won, but the Department of Monuments people can be a real pain in the butt. You will probably have lots of hassle with them too, but in my opinion, solar panels would really be the way to go.

Of course, they won’t let you have the normal, ordinary, ugly, Chinese, shiny-black ones, but you could try to get the new, classic, orange-clay coloured, French-made ones. They are bit less efficient, but much more beautiful. Just think, yours could be the first cathedral that is helping to save our planet. I think the idea is a real winner.

Well, when I first came to Geneva in the late seventies, grocery shopping was an awkward, embarrassing, socially and emotionally dense business.

We lived in a village on the lake and the general store was on the corner just below the church and the old castle tower. It closed at mid-day of course, so you had all morning to prepare your list and practise pronouncing the slippery French words. By the time 3 o’clock afternoon opening rolled around, you were a bundle of nerves, shaky and blotchy. Your list had turned into a scummy ball of grey mush. You were going to blow it. Again.

It was a one-woman show, and the lady behind the counter and in front of her meat-slicing machine and her out-sized basket of baked goods and her tins of tuna and bags of pasta had the understanding and the grace of a dragon in a cave guarding its hoard of gold. There was self-service nothing, and the array behind the carefully-coiffed head was so intricate and tightly-packed that you could not get away with pointing and mumbling. 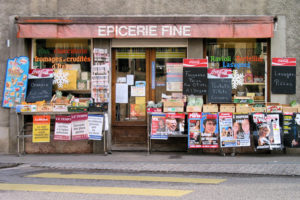 She spoke not a word of English, and I recall the worst thing being her constant use of “ça va?” Not understanding what THAT meant, the question was more than moot. It became a linguistic and intellectual red-hot poker of shame.

If things got complicated and she started playing with my mind by asking about the thickness of the ham slices or the weight of the butter package I wanted, a quiet line of villagers, armed with wicker baskets, would materialize behind me.

Leaving was also traumatic as she often insisted on the correct change. Fifteen was my worst number and I still don’t like to use it or think about it much.

Today, some forty years later, I visited my suburban supermarket where the shopping experience has become a sad and empty affair. This morning there was only one human cashier (with a huge queue snaking up to her through the shampoo aisle). She looked frazzled.

There were, though, eight automatic scanning machines. They looked plastic and hygienic.

At one cramped, beeping machine, I methodically scanned each of my precious items and was watched carefully by an ex-cashier now turned shopping trolley cop.  Not a word was spoken as I searched for the barcodes and filled my two shopping bags. I was doing her job. Slowly and badly.

When the process was finished, she wandered away from her observation post and I received a screen message that a store person had to verify my purchases.

Called back, wordlessly with not even a grunt, she flicked her magic tag in front of the machine. Not a single murmur of praise about my masterful shopping or the clever choice of German asparagus or the lovely bit of fish. No questions about the Chinese 5-spice jar or the chopped pistachios.