In these pandemic days The Swiss Federal Government is trying hard to keep up the citizens’ morale, and give us something meaningful to do.  They are on a roll. Last month featured the Swiss Army Underwear Scheme, and this month they have invented the Great Swiss Underpants Experiment.

Yes, there is a certain lack of imagination in the theme involved, but, then again, this is Switzerland.

Anyway, they want everyone to bury underpants in their gardens or fields and see what happens. This country-wide scheme was initiated by Agroscope, a federal agricultural-based platform, in collaboration with an ecologist at the University of Zurich. They want to survey the richness of Swiss soil.

After extensive research, I have found out that this is a time honoured technique. Swiss farmers have always buried their underpants. I myself, have even seen evidence of this just over the border in Haute Savoy, France, where our old neighbours were mountain farmers. This practise explains all the dark grey splotchy underpants always hanging on the line along the side of their farmhouse. As the land was so poor in nutrients, their underpants never dissolved in the miasma of bacteria, woodlice, earthworms, fungus strands and microscopic spiders of the rich lowland fields. Henri and Roger obviously just rinsed off their undergarments after a couple of months underground and carried on. 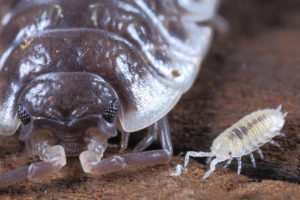 For the first 1000 collaborators in the Great Swiss Underpants Experiment, there will be two pairs of underpants provided for free along with six tea bags (this is for the Tea Bag Index comparison.) If you miss out on this offer, then you must use your own underpants that have to be 100% cotton, white, and “bio” (organic) and your own tea bags (one black and one green in tetrahedral bags will do.)

Your white cotton culottes have to be planted vertically and you must dig the trench straight down with a spade without disturbing the soil layer. You can leave the elastic band at the top sticking out. After waiting for two months dig out what’s left of your underpants, and send a picture and a soil sample back to Marcel.

You are advised to do the experiment in the springtime (NOW!) when the soil is most active, and you must visit the burial site regularly and observe the odour of the soil and the presence of earthworms.

You are warned that it is possible, because of climatic conditions that your underpants might not rot. This would be a great disappointment, of course, but could be entirely due to drought, for example rather than a lack of healthy dirt. It does not mention whether or not you should water your underpants.

Everyone who participates in The Great Swiss Underpants Experiment will be listed as a scientific co-author when the results are published–a meaningful addition to your post-COVID19 CV.