I’ve only been to three Michelin-starred restaurants in my life, and I didn’t pay for any of them.

The first one was in the south of France some 40 years ago. After having eaten one of everything, we placed the (possibly already full) credit card in a tastefully hollowed-out ancient book. To this day, the amount has never apeared on our credit card statement. The second one doesn’t really count, as I had booked the wrong restaurant and I don’t want to talk about it. And then there was last night in Geneva.

It was a gift, and in many ways it truly was. I saw and encountered several things that were entirely without precedent. It was sort of Cirque de Soleil on the table cloth.

The lights were dim, the pillows were plumped, the Christmas wooden soldier theme tastefully arranged and the spectacle was about to begin. 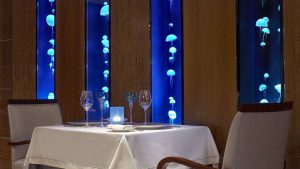 We popped in the chou pastry tickle-your-mouths. We delved under the foam of the oceanic pre-starter to find fishy bits and chestnuts. I think.

The butter girl passed with three different flavours (regular, vanilla, and pepper) and then my main starter arrived. It was an artfully-created miniature village built with bits of fig on a round slice of foie gras. In the middle there was a fig-jam pond. The little houses had real golden roofs. There was a wall of paper-thin pink wafer that stood up, ineffectually protecting the little hamlet from the wicked fork and knife that were about to descend.

The nice young man came to brush up the crumbs from my freshly-baked brioche, and then the second starter arrived. It featured porcini mushrooms in all their possible forms. There are, perhaps, reasons why Mövenpick does not produce industrial mushroom ice-cream.

Before the main course the knife girl came around with a set of six knives. You had to choose your handle colour. I chose shocking pink to delicately cut my venison. But the real treat was the chef’s speciality—a hallucination-in-a-glass called cappuccino. It was a mixture of potatoes and white truffles with black truffle crumbs sprinkled on top.

The first dessert (called “a moment of sweetness”) was rather a shock, as there was a slice of raw fruit involved. This was more than made up for, however, by the decomposed miniature lemon tarts. And the main dessert was a magnificent jellied puddle of orange tastefully holding together a slice of apple on a biscuit.

After the chocolates and the fruit jellies, we finally ended the evening back at home watching the Japanese sumo championships on TV—which seemed especially fascinating and relevant after having eaten an entire village on my plate.

The gargantuan worlds of ritual and magic are now behind us and we have landed softly back into our Geneva-countryside world of bread and jam, baked squash, and grilled cheese sandwiches.

I have, though, put gold foil on my shopping list.

I hate massages, so one good thing about living in the Swiss countryside is that this is not considered a social or mental shortcoming. However, having recently been in a town where every second person on the street offers you a massage (the other half offers transport) I eventually got snared.

Now this wasn’t your normally nasty sandy beach massage, or your cheap and cheerful downtown flea-pit massage. It took place in a respectable spa on the top of a windy ridge in central Bali. 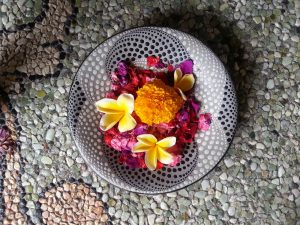 The oils and lotions were smartly-packaged and you could choose your flavour. The delicate jasmine body oil was a far cry from an extremely unpleasant experience some years back involving a tar-like product from a bucket that was an indelible mixture of shoe polish and petroleum jelly.

The sarong on the massage table was clean, and the subtly-muscled staff was dressed in matching business-like polo shirts. Before beginning, you had to fill out an official form on a clip-board indicating the strength of massage desired, and pointing out any areas that needed special attention. You naturally slip into your “fooling the doctor” mode and give nothing away.

We chose the Intuitive Heart Massage during which you are encouraged to drift off into a slumber-like state of peaceful bliss for 90 minutes, and to awake refreshed and reinvigorated. (My sister has since pointed out that they only give heart massages to dead people such as Princess Diana in the Paris tunnel.)

It started badly. As the nice young lady was wiping invisible specks of dust off the soles of my feet, my tickle-reflex kicked in. Fortunately, no lasting damage was done, but the next 89 minutes were doomed.

She intuitively started with my bad knee finding all the most painful acupuncture points. The Swedish-style hammering did not help. Her intuition held, and she moved right along to my bad back and turned her arms into rolling pins.

A good massage certainly takes your mind off things outside your skin. You become a ball of anticipation worrying about what painful thing is going to happen next. You mull over the possibility of actually dying on the massage table. You try to think Zen thoughts as the thunder crashes and the rain pours down – such as why you didn’t bring an umbrella, or why you didn’t wear your lucky purple underpants, or which is worse—here or at the dentist’s? You try to breathe calmly and quietly without gasping.

Leaving the massage table in a state of euphoria and mental confusion, you have to teach yourself to walk again.

As you sip your post-massage organic ginger tea, you notice that the people around you seem bouncy and liberated. They have probably slept through their dreamy massages and remembered their umbrellas. Perhaps they have even had the post-massage Singing Bowl Healing Vibration 30-minute treatment which sooths and heals.

They probably even love massages.

The Geneva jail is hideously overcrowded, and I have a theory that this has to do with many poor innocent people who are unaware of Geneva’s strict Sunday rules. In our village, for example, we are periodically reminded of them via a perky newsletter.

As a public service/stay-out-of-jail announcement here is a brief summary of the most important forbidden things.

First of all, shops are shut on Sundays. In our village we have a small rogue corner store that opens on Sunday mornings and sells delicious fresh bread along with everything else. So far it hasn’t been busted, but I figure it’s only a matter of one rotten tomato and of time.

Then there is the great concept of public tranquillity. Sundays and public holidays are the most important moments, when a deep undisturbed peace is supposed to fall upon the land. No lawn cutting, no chain-sawing, no power tools. Flushing toilets and taking showers are decidedly grey areas. Hanging out laundry—even the quietest of discreetly-patterned textiles—is frowned upon. Washing your car is a no-no. 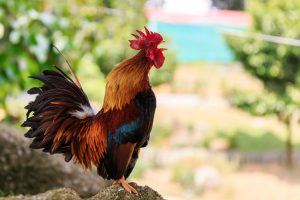 Legal quiet time is ordained daily from 10 p.m. until 7 a.m. Also between 12 noon and 1:30 p.m. so the breadwinner can eat a nice home-cooked meal, listen to the Swiss radio news, and have a refreshing siesta before getting back to the office. Loud music and live music are also not allowed (i.e., the drummer or the alp-horn blower in the apartment next door are strictly verboten.)

Fires will ALWAYS get you into trouble. I once tested the wind and when I was sure the smoke would blow straight into the fields, lit a very modest garden stick & leaf fire. The mayor’s wife was at my side in a flash and offered the helpful political suggestion that I should take all the combustible matter inside the house and burn it in the fireplace instead of outside. Ah-ha: A secret fire.

In Geneva in the old days before cars and planes and vacuum cleaners tore through the city, there were serious rules concerning carpet beating and roosters in the Old Town.

All of this is again in the news, as our next popular vote is entitled “Don’t Touch my Sundays” and concerns the reversal of a ruling that shopping malls within hailing distance of international tourists’ requirements can, possibly, offer shopping hours on Sundays.  There is the much more reliable second option of shops being allowed to open three Sundays per year.

But none of this really matters, of course. Here in the Geneva countryside if we want to Sunday-shop we can go to the markets or the supermarkets in France. If the rooster crows we can turn it into coq-au-vin. We will not starve.

Quaint Geneva will prevail and I am quite sure that we will have at least 49 Sundays a year of total peace and quiet.