There are startling similarities between Alberta and Switzerland. There are the mountains—the new Rockies and the old Alps; the scenic vistas with turquoise lakes—Banff and Interlaken; unsettling wildlife—grizzlies (eating campers) and wolves (eating sheep); and, back in the day, trainloads of quiet and moneyed Japanese tourists paying big bucks to soak it all up

There is wealth—oil and gas in Alberta, watches and banks in Switzerland. There are dues to be paid—to Canada and to Europe. And there is an attitude against aristocratic rule, whether it be the 14th-century House of Habsburg or the 21st-century Houses of Parliament. A vocal slice of both populations (Alberta has exactly half of Switzerland’s 8.6 million people) are busy on weekends claiming their rights to individual freedom.

Of course, the William Tell legend raises its apple-coiffed head here. There is no pole with Albrecht Gessler’s hat on it to be bowed to in either Edmonton or Bern, but instead there are provincial and federal rules to be followed. Or not. 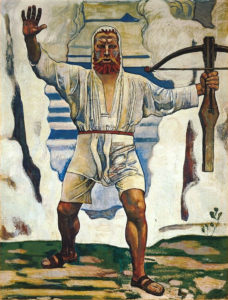 The question, of course, is covid19-related. Masks or no masks? Vaccines or no vaccines? Who do we listen to? Who do we believe? Who do we obey? Who do we trust? Who do we bow to?

In both places the vaccination rate has frozen. Today’s data tell me that in Alberta it is at 64.7% and in Switzerland it is 62.5%. In both places there have been financial incentives to persuade the hesitant to do the right thing. It seems that not even money is working.

Metaphoric crossbows abound, and quivers are filled with slotted arrows.

Stuck in this impasse, it is of immense interest that my trusty stringer in Calgary has asked that I aid and advise him in choosing his city’s next mayor. As the election is tomorrow, there’s no time to lose.

I have received the list of 27 candidates (5 have no campaign page) and the choice reflects the citizens current preoccupations – much of it anti-authoritarian and pro-small business. If we kick out the obvious nut-cases (covid shots are implanting microchips in your body as part of an international conspiracy led by Justin Trudeau) and crooks (assault charges, anti-mask agitation and hate crimes) we get to the very heart of doughty civic concerns.:

We see the Tell themes displayed to perfection … the abolition of authority, healthy food (apples) for the children, total tolerance, practical improvements, and unpaid jobs for university graduates.

The strong man of the mountains would have approved.