One good thing about the COVID19 situation is that the world comes to you if you wait long enough here in the Geneva countryside. Well, some of it does. There are a few things recently that have come all the way from China, only to have been delivered to the wrong people, but that’s a whole other story.

For example, there are the birds: Black kites, to be exact. They come from Senegal and are normally migratory. However, a canny butcher in a neighbouring village scatters his lawn with meat scraps every morning. Word has got out, and the lazy birds no longer continue their migration to the beaches and garbage dumps of the North Sea, but stop right here for their tasty-treat summer vacation. They can be seen wheeling about the sky in a huge flock after their daily brunch. They all fly back to Africa in October, fat and happy, and spend their winter dreaming of next year’s Swiss holidays.

Then there was the surprise visit of the roof painter. He was an integral element in the solar panel installation saga, as the Geneva Department of Monuments insisted that every square inch of our roof be completely covered by the panels to avoid unsightly orange tile areas sticking out around the edges. (They had obviously been talking to the kites, as no one else could possibly be disturbed by what is necessarily an eagle-eyed view.) He had brought a picnic with him, and spent the day both on and off the ladder. We talked of grandchildren and chased away the wasps.

The roof is now a homogeneous shiny black and looks sharply Japanese.

I have been at home for all annual services – the water softening man (from Java) was a particular pleasure. He was charmingly polite and masked and shoe-covered. He admired a piece of ikat weaving and asked its provenance. His grandmother used to weave. 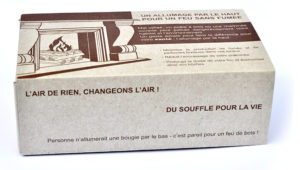 And the very best was the normally elusive chimney sweep. He started as usual, putting a note in the letter box stating a date and a day that did not match. This was followed by his showing up a week early. I expressed surprise and Swiss wifely concern that the fireplace was not cleaned out ready for him.

At the end of his visit I was presented with a box of matches and fire starters, and a small lecture.  He asked if I light fires from the bottom, and when I answered in the affirmative, was told that this was wrong and there was a new method: You place your big logs at the bottom, and on top of them you place the little hand-made fire starter bundles. One match and your fire magically starts and somehow the logs underneath catch and the fire is smokeless and we save the planet.

I asked if there were going to be random police checks on this new technique, and he said he didn’t think so.