It has been a peaceful month.

The army no longer drives past in convoy to its shooting practice in the bird sanctuary down by the Laire River. Wild flowers are growing on the bullet-riddled dirt mound backstops.

Airplanes no longer fill the approach path to the airport, instead birds fly the sky – the swallows and hawks; and gather in the garden – the sparrows and the redstarts. The cat sleeps with his paws over his ears.

The morning and evening commuters from France have been stopped in their careening work-late and home-eager tracks, as huge concrete blocks have been placed to reinforce the border barrier. Someone has stolen the Swiss federal government Keep Out! sign.

There have been no car horns or roars of rage. No near-misses on the way to the recycling bins over the road.

The grandchildren stay at home, and grandparent duties and pleasures have all been suspended. Pictures of growth and haircuts fill us with longing and wonder.

There have been many glorious walks, observing the new-born spring flowers sprouting cheek by jowl with empty energy drink tins and toilet paper mounds. Little nearly-dry rivers have been turned into Riviera-style bathing spas on hot days, with children and parents and parasols and water wings. There was one extremely exciting spotting of a well-tanned roly-poly fat man sporting nothing but a small sunhat. He was politely giving directions to a hiker lady with a map.

The garden has received extreme attention. Instead of the annual Swiss-imperative geraniums, wild flower seeds have been planted and have popped up hopefully into the clean and quiet air. Mother Nature has been relegated to a couple of nettle-filled, goldenrod-infested spots. Henrietta, the hedgehog, has not been seen so far. Perhaps she is sleeping in this year.

The village shop lets in only four hand-sanitized customers at a time, so you feel safe and comfortable as you eagerly search for what’s new in stock. They also bake bread and, amazingly, have maple syrup, peanut butter, and cranberry sauce. Meat comes and goes and the ice cream shelf is almost empty; but this morning a shipment of fresh asparagus had arrived from Italy. 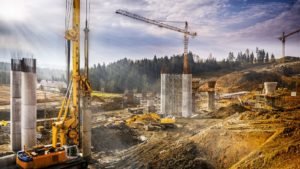 You walk home with your basket full and feel as satisfied as a hunter coming home with a wild boar over your shoulders.

But a huge crack has just appeared in our noiseless new normal.

For the past few weeks, the construction site over the road (another apartment building in the Swiss countryside) has been shut down and the giant yellow crane has become our personal weather vane swinging silently and freely in the wind.

This morning’s racket began with the once-familiar roar of dump-truck emptying a load of gravel. Then there were more. Cement mixers have arrived on the scene. There was a scuffle at the bedroom window to get a glimpse of the action starting back up.

The crane now swings with purpose and precision as the crane man is back at work.