There is nothing sexy about the flight from Geneva to Zakynthos. Rather the opposite, as a matter of fact, as the screaming, sneezing, snuffling toddlers at the back of the plane are enough to put one right off.

After the shock of the almost completely empty Geneva airport (where only the smoking areas were jammed chock-a-block full), it is a wondrous scenic ride as you majestically pass over the Alps into the flat Po valley of Italy and down the coast of Croatia to the Ionian Sea.

The passengers are youngsters with buzzed hair (men) and casual top-knots (women).  Everyone sports bare limbs and tattoos. To pass the time, you count the moles on the head in front of you. His companion lifted her mask frequently in order to bite her fingernails. Nerves are on edge as the pilot tells you NOT to turn on the over-head air-blower and that masks must be worn at all times EXCEPT when the emergency oxygen masks pop out.

Most passengers sport ear buds and with blank eyes make small vibrational movements. They are already dancing in their heads.

At least with the 150-minute ride, you do reach a real destination, unlike the planes that are flying in circles these days. (The Quantas “flights to nowhere” are selling like hotcakes.)

Going to Zakynthos is going back in time. Back to the ‘50’s perhaps …. and simple excitement abounds.

Our hosts warn us immediately about the shooting around the house every morning. These are the fall hunters whose sport is to dress in camouflage gear and blast shot in the direction of small birds. Hosts are quite sure that they never hit any of them (as no bodies have been found), but it is quite dangerous and going for a swim or to collect figs from the fig tree is best left until they have run out of ammunition.

There were old-fashioned visit-the-kitchen restaurants, a swim on a turtle-nesting beach, delightful retsina, ruby-red tomatoes, bricks of feta, an ice cream parlour, and souvenir shopping. 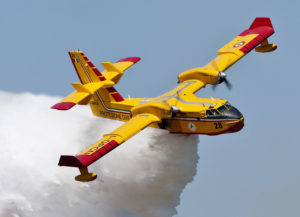 Then there was the boxy airplane that flew low over us on the road and disappeared into the sea. This it turned out, was Canadair fire-fighter as there was a blaze in the dry country to the north.

The bush fire was definitely doused by Cyclone Ianos that landed and stuck for a few wind-whipped days. There was no electricity, no water, and, most importantly, no coffee. It was quite a relief for the birds, however, as the hunters all disappeared and dozens of swallows came to our balcony to discuss affairs and dry off.

The airport re-opened and we regained our seats amongst the weary strong-lunged toddlers. My prized souvenir had been confiscated of course, as the customs man, obviously a hunter in his spare time, had taken away my little olive-wood rolling pin.

I suspect marital problems; or, more optimistically, perhaps it was the wife’s birthday?

Driving along in an automobile at the Swiss-French border where the cable-car comes down from the Salève (the mountain backdrop to Geneva) I was treated to a blink-of-an-eye vision that transported me back to pre-COVID19, pre-grandchildren, pre-job, pre-motherhood, almost pre-adult days.

Trudging from the Swiss border bus stop was a young couple, a man and a woman, who each pulled a small wheeled suitcase. Bags and other accoutrements were slung around their necks. They wore light summer clothes, hats, sunglasses and sandals. Their attitude was of pleasant purpose as they strode towards the “teleferique”.

In her free hand, the woman carried a big transparent bag full of fat carmine-red tomatoes.  They were off to have a picnic to the top of the Salève. They were going to fill their minds and spirits with the twin bird’s-eye views of the Lake of Geneva on one side and Mont Blanc on the other. They were going to eat the tomatoes!

And it was those tomatoes that punched me backwards into summers past: Catching the ferry out of Piraeus to the Greek island of Samos; hiking through the parched landscape of Göreme in Turkey; climbing up the jungle-draped ruins of Guatemala; canoeing to One Bear Island in Algonquin Park.

The lady had a food bag.

Most of my travelling career has involved food bags of one sort of another. On Geneva train trips down to southern Italy there was the exciting combination of equally-important daughter, dog, husband and food bag. There were tins and openers and wine bottles. There were Cornish pasties and meat balls and cucumbers. There was the can of coke that accidentally drenched a nun in a train compartment while pulling out of Rome (No. She did not turn the other cheek, but left in a drippy, sticky huff.) 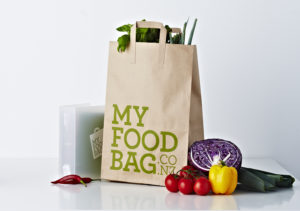 There were Swiss army knives and rolls of toilet paper and bread and chocolate bars. There were matches and raw potatoes and tortillas and squished fruit. There was a grapefruit that lasted an entire trip.  There was cheese, kirsch in a baby-food jar, and an earthenware pot and a fondue in the snow. There was a 30-franc apple and a bag of seaweed crackers.

Having a food bag is almost as good as having a camper van. It represents independence and commercial freedom. A food bag gives your life gravitas; you are dependent on no one. As you eat your sandwich beside the hiking trail or the ski run, you are wished “bon appetit”. You have risen beyond the world of tacky restaurants and mundane tables and chairs. You are lightened and liberated and filled with untold potential.

So, grab a food bag and head off. Pick a clear day and view-rich destination. Take some buns and sausages with chocolate cookies for dessert. If possible communicate your intent to others by packing it all in a transparent bag.

And don’t forget the mustard