The second of January is an odd and unsettling day. The celebrations are over, but the old routines not yet re-established. The fridge is full of left-overs but the stomach is still ominously rolling after days of various excesses and strange combinations. (The evening of the fish-eggs and meatballs comes immediately to mind.)

The soul is not at peace as procrastination, a lowering sun and downright laziness have resulted in unsightly windows, sticky floors, and a heap of ironing.

Both the spirit and the flesh, slowed by chocolate, champagne and Christmas newsletters, are weak.

This morning’s walk was not planned. Shoes were wrong and coats were thin. There were neither gloves nor hats. There had been no hearty breakfast, and there wasn’t a caramel to be found in any pocket. It was the Rhone River’s sirens who beckoned us down to walk its shores.

Downriver from Jonction, past the drug dealers, the graffiti, and the garbage to where the washerwomen used to moor their laundry barges.  Past the cliffs of St. Jean, the river birds, and the fields rolling up to the pretty 18th-century Villa Cayla. Then the climb to the viaduct over the river with its classic view of the meeting of the Arve and Rhone rivers with the Salève and Alps as the backdrop. Up and up, into the park of the Bois de Batie with its howling dogs and cackling geese, and then down again to the urbanized river path. 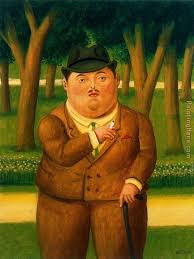 And then we met him. The Geneva Tourist.

The wind was blowing directly down from Siberia, through the tunnel of apartment buildings and along the river. The closed café terraces were stark and empty. The first public barbeque grill was filled with abandoned half-burned logs, but at the second one there was a man and a boy, and they were busy.

The man had an old-world Botero aspect. Well-dressed against the wind with muffler and parka. Thick tie-up shoes. Impeccably groomed. The boy was chipper and bright.

They had tentatively lit some big black coals and were trying to protect their little fire from the wind.  The boy was gathering twigs. We hailed them in French, as they were obviously not tourists. No silly hats or shoes or behaviour. But no. They could only speak Spanish or English, he explained, as they were on holiday at his sister’s place. He introduced himself as a bonafide tourist from Paraguay who had been sent out of the house to make a paella.

In the bags at his feet were the makings of an elaborate family meal. His fire was pathetic and the cold wind relentless. He was, however, cheerful and resolute. He had a plan and all its ingredients to hand. Things could only get better.

And so, in these out-of-joint days when it seems that everyone else is doing something else, take heart! Somewhere out there, there is a tourist busy doing something completely impossible.