Well, we had successfully motored south from Naples on the autostrada. There were the usual minor thrills: the exciting instant narrowings from two lanes to one, the huge transport trucks suddenly veering out in front to try to pass something large like themselves, and smokers (think Waterworld) tearing up from behind to stick to the back bumper flashing and honking their impatience

Just the usual uneventful Italian jaunt down to Tropea to catch a few days of sun, buy some sweet red onions and  soak up some Mediterranean blue.

During the drive we made a few interesting social observations. For example, the latest successful Calabrian businessman’s automobile-of-choice is no longer the black Mercedes, but the elegant Maserati.  (The onion business must be booming.) Also, be warned. If you pull off into a small scenic Italian village expecting lunch, you will be lucky to find yourself eating a slice of old cold pizza with a bunch of bored teenagers as all proper restaurants have closed.

About twenty kilometres from our destination, we peeled off the motorway and came to the merge of the coastal highway. And right there, there was a crunching crash.

We had been rear-ended.

By the time the police arrived, the young man perpetrator had calmed down considerably.  As he had been driving his mother’s car, there had been many urgent calls home with all the latest updates. Friends, family members, and total strangers all arrived at the junction to express distress and dismay as the sun was setting into the sea. 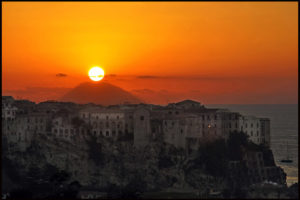 The young man claimed he had been blinded by the sun. This might have been true, but he would have had to have been looked backwards over his right shoulder.

The cops had been called as our car papers did not belong to our rental car. The family rejoiced and dispersed, as they thought they had won on a technicality.

The police couple arrived with their red lights flashing and parked importantly in the middle of the road.  He was standard, but his female partner was wicked. Imagine a young Cher in a uniform. Her hair was long, straight and black with bangs down to her eyeballs. No silly hat. Her lipstick was fuschia. Her eye makeup was, for sure, dark and sultry but impossible to see as she was wearing aviator sunglasses with mirror lenses. Her long fingernails matched her lips and she was studded with jewellery—bracelets, rings and necklaces. Improbably, she also wore firemen’s boots.

But her attitude was the best. She was unfazed by the small amount of damage. She seemed to care little about the erroneous car papers. She wanted to get back to where she had been before the tourists had interrupted her life. A bagattella.

The sun had long-since set into the wine-dark sea and Stromboli was puffing gently when we finally reached our hotel. Climbing hungrily up the hill to the village restaurant, our holiday had finally begun.