Nestled in the soft bellybutton lint of the southern Ontario summer holiday fantasy, is the primordial concept of “the cottage.”  It is a crisp-aired yet dreamy place, where you escape for a week or two. It is always “up north.” Much more than a building, it is a dose of mental medicine that untangles your knotted mind from quotidian urban preoccupations and draws you back to the cry of the loon.

The cottage is built on the tranquil shores of a mussel-fresh lake. It is made of wood and surrounded by trees. There is no lawn, but rather a deep carpet of pine needles with the occasional trillium or jack-in-the-pulpit poking through. There is a stony path leading down to the boat house where there is a crumbling dock and an old canoe. The shore is pebbly. There are braided rugs and painted wooden chairs. 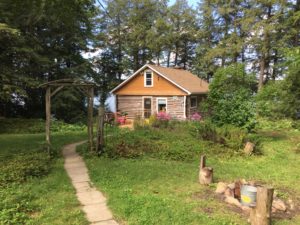 I vividly recall my first childhood cottage: it had no refrigerator. Instead, the iceman came with a block of sawdust-crusted ice that with a great forceps-type instrument he placed in a drawer underneath a smelly cabinet.  It took a week for the block to swelter slowly away. It was magic.

So, with great interest and excitement, I have lived the cottage life vicariously this past week, as my sister took an assortment of family members “up to the lake”.  It seems things have progressed in my absence.

A cottage now needs to have a lake in the vicinity, and, sure enough, Lake Huron was a short walk away from the bungalow that was part of a cottage development neighbourhood. However, municipal by-law rules on the beach can be a real party-pooper: no drinking, no smoking, no glass, no pets, no noise, no picnics, no games, no drones, no fishing. So, after finally getting to the wave-lashed beach with the kids, it can be quite challenging to have a good time.

In my sister’s party, no one was actually arrested or imprisoned, but it was a close call as an unmarked police car stopped the small family group on their way back home to inquire if alcohol was being consumed ON THE SIDEWALK by the adult male. Fortunately, the beer bottle had been emptied and discarded prior to the question, so it was moot. That the youngest child was being carried, screaming and kicking away from the water, was also a useful distraction.

Of course, there was the initial family squabble about who had to sleep in the laundry room. Then there was the visiting monster child who bashed through the rented cottage screen door threatening to kill people with the kitchen knives. This was followed by the teenager hogging the bathroom while a 6-year old had to go #2, and the inevitable rainy day monopoly game with smoked turkey thigh in a shrimp sauce for supper.

The cottage holiday is almost over now, and my sister assures me she, as ever, will be most refreshed and reinvigorated when she gets back home.

And so, the myth lives on.