Yesterday morning, I found myself considering smashed flattened automobiles being hoisted high into the sky, swinging around a bit, then being dropped onto a huge heap of other rusty pancaked cars below.

Underneath this exciting live show was a huge TV screen with a colourful 9-minute video clip on a loop extolling the virtues of tires being mounted and wheels zippily screwed manfully into place.

To my left was a glass wall of windows that overlooked the peaceful bird-filled banks of the Rhone River. And straight ahead were the inner workings of Geneva’s biggest tire emporium, Pneus Claude. 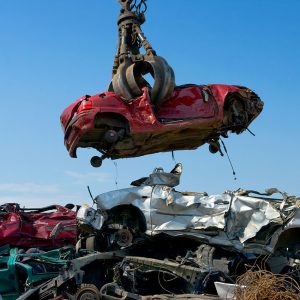 Yes. I had declared it a “service day”, and to complement an afternoon session in the dentist’s chair, chose 10:30 a.m. as the ideal moment to change summer tires for their winter siblings. It was the great bi-annual visit to Claude’s Tire Garage.

I used to dislike this chore, but over the years have begun to enjoy it. It is a bit like playing golf—you compete against yourself: the brevity of waiting time being the main goal. You succeed (as I did yesterday) by being out in under 30 minutes. Your car is the first in line. You have speedy friendly chaps—both at the check-in & pay desk and the rinsed-car return. Your tires are quickly deemed legally correct for at least another year. Your mechanic doesn’t stop for a smoke break after the first two tires.

And the waiting room has been greatly improved. Along with all the windows to keep a person entertained with the outside world, there is now heating,  tables and chairs, a complete collection of all of Geneva’s free newspapers, a clean washroom, and, if you walk up to the fourth floor a fascinating showcase room of over 300 different models of wheel hubs.

Five vending machines hum importantly in the back corner. The queen is the panini machine which brings you hot flattened sandwiches 24 hours a day. This poetic choice exactly mirrors what’s happening at the demolition site next door as you wait excitedly for your number to be called out.

It is, primarily, a man’s world. A world of work boots, blue jeans, black t-shirts, and bellies-over-belts. It is invigorating and active with people and cars and taxis and trucks and vans and ambulances all busily coming and going.

Of course, there is no wicked crystal meth lab under the floor of Pneus Claude, but there COULD be as no one would ever notice. And Jesse Pinkman would look right at home in the red Pneus Claude jumpsuit driving their Mobile Tire Garage helpfully and hopefully through the Geneva countryside.

In these depressing days of Aleppo and Mosul and Donald, there is help at hand: the distraction of the fall fair.

Living in the Geneva countryside, you can choose your fair. There is, for example, the big Geneva Fall Fair (Les Automnales) coming up next month. Hundreds of stands will be set up inside Palexpo and you will be able to buy a house, a car, a dog, furniture and a swimming pool. You will be able to sign up for a kick-boxing and/or dancing classes and get a massage.

I have bought many lovely and useful things at this fair—an inlaid cow with a secret drawer, a camel blanket from Morocco, and a bracelet and headscarf from Palestine. It is an ideal place to do your Christmas shopping.

For the more rustic, there are the fall fairs over the border in France. The entry is free and after the danger and excitement of parallel parking on the mountainside main road you join the cider-drinking crowds. You buy roasted chestnuts and listen to the brass band playing on the town hall steps. They are dressed as clowns and one is proud to note that political humour is alive and well in France.

You closely examine the exhibitors’ stands. There are a couple of vans up from Aosta, Italy, selling copper pans and dried meat, but otherwise it is the local people selling what looks like their well-used personal belongings. 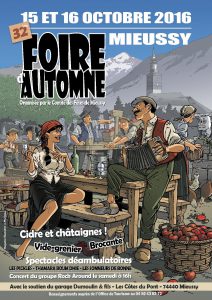 This year, among the wheel hubs, old clothes and shoes, piles of cheeses, and the priceless candy man, we particularly admired some mounted deer heads and a green frog water pitcher. We bought a house-full of porcelain plates for next to nothing as there seems to be a glut of old china on the market as it is not suitable for modern times as it loses its gold trim in the dishwasher.

Complete strangers brag of their extraordinary bargains. There is an overwhelming atmosphere of correct (cheap) consumerism. The collective mind harks back to the excitement of being a little kid with a couple of bucks in your pocket and endless potential purchasing possibilities.

And, of course, this is the beauty of the fall fair. It takes you back to the old days: the carnies putting up their rickety rides on the old fairgrounds; maple sugar candy, toffee apples, and bags of fudge; the prize-winning pies and butter tarts looking a bit worse for wear after a few days in the sun.

My sister tells me that nowadays in Canada most of this has been replaced with the spare-rib trucks, the skewered deep-fried potato slices, the lottery tickets, and the acrobatic girls dressed as bees showing off the vintage cars.

We agreed, though, that there is still that occasional whiff of cotton candy and cigar smoke in the crisp autumn air that shoots you, straight as an arrow, back to a gold-trimmed past.

I should have immediately realized that all Geneva shops running out of canned pumpkin was a sign. And then there was my sister’s message proclaiming that not even SHE (the festive queen) roasts turkeys anymore due to the last one being raw, overcooked, and inedible all at the same time. She clearly mentioned a turkey jinx, and I should have dropped all turkey plans immediately and firmly turned my mind towards salmon mousse and osso bucco.

But no. Once a girl gets a turkey dancing in her head, there is a fowl imperative.

(Historical Note:  Yesterday was the second Monday in October and, thus, the real (Canadian) Thanksgiving. The one that the freezing British explorer, John Frobisher, celebrated with his men in 1578, followed by the French settlers of Quebec in 1604 forming the Order of Good Cheer and having a jolly good pot-luck supper with their native neighbours.)

So, on Saturday evening, a distinguished group of French and Japanese friends were invited to our house for supper. The menu was not announced as the surprise factor and the photo opportunities were a brilliant foil for any culinary disasters.

A 6-kg fresh French turkey had been ordered. When it was picked up, it weighed a startling 10 kg – the reason being “they only had big ones”.

I consulted my 1960s cookbook, and was informed that, when stuffed, it would need 9 hours in a slow oven. In the old days, this would have been sufficient information. But having squeezed the huge naked thing with shaking wrists onto a baking sheet and into the lukewarm oven, I started checking.

I now have serious issues with the World Wi 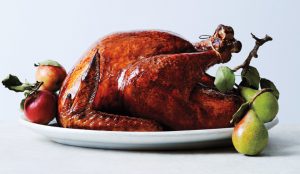 de Web. The amount of information there was entirely mesmerizing and contradictory. By the time I had read through it all and realized that (probably) the turkey needed to be started in a hot oven, it had already been in a cold over for over an hour.

Covered in aluminium foil (due to lack of a turkey pan) it sat there doing NOTHING for half the day. As the sun tipped over the mountaintops I began to panic. I had found my turkey baster, but there was nothing to baste. There were emergency consultations. The upshot was that the stuffing should, perhaps, be outside, not inside, the bird. My American friend recommended one hour per pound (i.e., 22 hours) and added the fact that in her family home they had a rocket that shot out of the turkey when it was done. (She might have been making this up.)

It was a long and anxious afternoon as I slowly increased the oven temperature. Emotionally exhausted, at the end of the nine hours I gave up and removed the turkey. Wrists (and all the rest of me) were shaky.

It was perfect, but this was just dumb luck.  Next year, I swear, I’m going to forget all about this feast, and celebrate the Geneva Fast (Jeune Genevois which observes the St. Barthomomew’s Day Massacre, 1572).

All you need to cook is a dead-simple plum pie.