Well, it seems that a new craze has taken hold in Canada – the muddled concept of the “rescue dog”.

This phrase first floated into my world some months back, when my sister wrote a startling message describing her encounter with elderly friends’ new family member, the Great Dane Rescue Dog.

From what I recall, the howling dog tore through the restraining door, and its rolling eyes accidentally met hers. After some skirmishes, she found herself pinned to the floor with the dog slashing its teeth, making a nasty throat-noise, and drooling above her.

I replied that the animal seemed quite spontaneous and undisciplined for a rescue dog. I know my dogs. We have had St Bernards in the family for decades, and though we’ve never been able to teach them anything, the concept of their plodding stalwartly through the snowdrifts in the Alps looking for people always made perfect sense to me.

And when not snoring and eating, they did always look out for children and guests in many gentle and thoughtful ways. Locking their teeth on a sweater sleeve when not wanting a person to leave the room, or a playful paw in the face to wake you up from an afternoon snooze on the couch come immediately to mind. 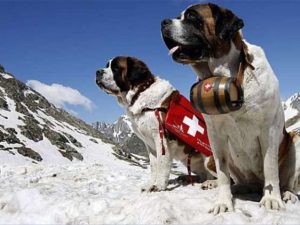 But no. These Canadian canines are not REAL rescue dogs. In the new politically correct language of double-think, the human is the rescuer and the dog is the rescuee.

These are the dogs you get from the pound. They are often young, energetic, and very big. Their reasons for being in the animal shelters are many, I am sure. They are advertised as being “pre-loved”. Many might have been “pre-hated”.

It is a moral status symbol to own such a dog. The onus is on the human to keep these dogs alive no matter what. As they age and their hips fail, you carry them up and down steps. As their kidneys fail, you inject them with liquids. As their hearing and sight fail, you walk them carefully on long strings and soft paths so they don’t get lost. You attach a bell to their collar.

It becomes a moral human failure to have a dog put down because of age and/or illness.

You have no responsibility for having dealt with dubious breeders and/or puppy mills.

You are pure, and as you are walking through a virgin forest and you spot a dastardly villain lowering a large-eyed puppy down into a bottomless well in a bucket. You shout out and save it. You name the dog Bucket to remind yourself of a momentary shining white knight part of your personality. You take lessons in “behoming”.

From then on, you are a happy martyr to your lucky lucky dog. And you tell everyone that you are the saviour of Bucket, the Rescue Dog.

A blade needed sharpening, and a few weeks back I found myself in a good old-fashioned French hardware shop.

While waiting for the skinny guy in overalls with morning-cognac breath to take the gory chain-saw details, a simple earthenware pâté pot caught my eye and I had a sudden fantasy of myself in a flowing floral dress.  There were no cobwebs in my hair or green aphids crawling on my skin.

I was surrounded by a lovingly well-behaved and appreciative family in the dappled sunny shade under the linden trees eating a neat little home-made pâté served with a cool and crisply acidic Cumberland jelly. There was heavy condensation on the crystal glasses filled with ice-cold sauterne. They all toasted my health.

The image was so perfect and powerful I bought the pot, and have been in a state of agitation ever since. 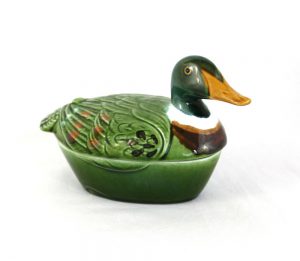 I know two actually-alive people who have made pâtés in their own kitchens (or so they claim) for me. Both (one rabbit and one foie gras) were delightful and delicious. Both were made in the winter months. Served with pickles and gooseberries, both were the centres of astonishing social events.

My trusty Larousse cookbook was a bit of a disappointment. The Country Foie Gras Pâté recipe is simplicity itself and calls for a huge (750g) goose liver which you chop up together with fresh fat belly of pork, pork suet and a piece of larding bacon. Truffles are optional—to be tossed in at will if you’re in the mood.

Apart from finding all the fatty ingredients, this seemed too straightforward, so I delved further into the dark and complex web world of liver pâtés.

I discovered to my horror that livers have veins that must be taken out. Somehow you have to butterfly-open the liver with your fingertips to present it with your herbs and spices. At some point you should soak it in salted water for a few hours to remove “impurities”. It is better to buy frozen rather than fresh foie gras, as it is “fresher”. After cooking you must press the concoction into a firm block using a precisely-cut piece of wood or cardboard and place weights on top. You must cool it for a day or two.

The Larousse cookbook mentions strictly none of the above information. As the French Bible of cookery it is assumed that you have a genetic knowledge of the nitty-gritty underworld of pâté production.

My summertime pâté-idyll is fading fast in the actual sweltering heat. The family comes and goes–happily eating left-overs and drinking pop.

The pâté pot sits on the kitchen table gathering dust as I suck on an orange popsicle and consider it. I think there might be just the place for it in an upper kitchen cupboard somewhere north of the pasta machine.