Just in case you’ve had the misfortune to have spent your summer holidays kite-surfing in Costa Rica, parachuting in La Reunion, at the cottage on the shores of Lake Huron or glamping in San Tropez, here in the mountains we have been fully, and even startlingly, entertained.

As it has been a hot and dry summer, there has not been the usual daily (and nightly) occupation of catching mice. All traps have remained disturbingly empty despite the miniature peanut butter sandwiches that have been lovingly prepared and placed in the little bait-holes. It turns out that is because of Sandy, the viper-in-residence who lives in the wood pile over by the compost heap. Our rational mind quite likes Sandy. The rest, and much bigger, part of our mind is horrified. 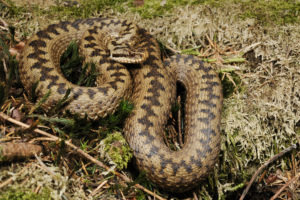 Sandy, however, has given us a lot of free time to read, to build a Walden-type cabin in the woods and to learn how to play Wordle, which, by the way, works much better if you read (and understand) the rules before you take it up. For example, the difference between the green and the yellow letters is crucial.

The new solar lithium batteries also mean that we now produce ice-cubes from the sun in the little ice cube tray in the fridge, so cocktail hour has become an elaborate, ecologically sustainable ritual.  As the sun slips behind the larch trees to the west, we can be heard tinkling up the path to the top look-out to admire Mont Blanc and the Vallée du Giffre.

I have also discovered that some activities work better if there is an audience. Take painting, for example. I was called out one recent morning to put stain on the cabin’s roof lattes before they became the roof. I dressed in my blue workers overalls and found stain, paint brushes, saw-horses, Swiss army knife and gloves. By the time all this had been gathered together, Dawn’s rose-red fingers had popped up over the pine trees to the east. The luxuriously easy job suddenly took on a whole new dimension in the searing heat.

Tom Sawyer’s punishment of whitewashing Aunt Polly’s picket fence came to mind. I had a sore back, and I wasn’t feeling too hot due to a five-course, 3-hour lunch in a fancy French restaurant the day before (okay, yes, there are a few downsides to mountain holidays). Placing the lattes on the saw horses, slathering one side, turning them over, slathering again, taking the sticky things off, leaning them against the fence, the bushes, the trees, all became a hot hideous chore.

Just before 10 am, the first tourist family arrived, toiling up the steep path to the Chapelle Jacquicourt– sweaty, panting and red-faced. Instantly my back straightened and my attitude sharpened. I stopped moaning. My latte painting became an activity of interest and industry. We chatted a few minutes and off they went—the kids looking back wistfully as I gracefully wielded my brush.

They would have given anything to stay and help.