There is a truck-stop on the Pan-American Highway in Ecuador. If the winds blow right, you have a clear and solid view of the Cotopaxi volcano from the smeary picture windows. And in the other direction there is a sweeping vista down the length of the valley.

This is a place of lost dreams and present-day hopes.

You are beckoned in from the highway by a skinny guy standing in the road frantically waving a red piece of cloth on a stick. You must slow to a dead stop to take the 90 degree turn over the culvert. There is a bus stopped just a bit further on with its driver lying underneath. 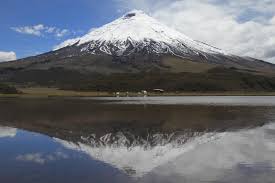 There are lots of parking spaces in the rocky wasteland around the brick building, and a young pony-tailed woman wearing blue plastic gloves is manning the smoky barbeque pit. There are five hand-made metal stars fixed to the front wall. The banos are around the back.

The waiter is dressed in a home-made uniform and looks like a cross between a bellboy and a policeman. Short and stocky, he is tightly buttoned in and stands straight and attentive. His black oiled hair shines impeccably. He offers deliciously tender meats served with local vegetables. The plastic water bottle is placed over his left paper-napkin-draped arm as he offers the label for inspection. He lights a candle on the table.

We later see that these attentions possibly are the result of his having successfully accomplished a Diner’s Club course for becoming a refined server. The diploma is above the till.

The meal was served. There were big green beans as appetizers, and then main dish of roasted meat was undefined and jaw-breaking. The vegetables were slippery mush except for the starchy white corn cob. There was a recognizable boiled potato. We tried to hide things on our plates to avoid disappointing our refined waiter.

A visit to the exterior bathrooms revealed that the sink and toilet were ecologically friendly as they were water-free. A barrel of limpid liquid was at your disposal with a red plastic bucket floating on top. You made your own-sized flush.

Anxious to be on our way, we rudely broke all refined restaurant protocol and went to pay at the till. Our ruffled waiter immediately disappeared into the back room and returned five minutes later with a hand-written bill, a bow and a flourish. He might have tapped his heels together.

While waiting, we had perused the Serving Diploma, seen a startlingly professional show-biz photo of our waiter with the barbeque girl in another glittering life when they had been musical entertainers. Their dusty CDs were for sale.

The bright lights of the city had been abandoned, and replaced with another kind of show at the El Mirador de los Volcanes Restaurant.

On the Pan-American Highway in Ecuador there is a refined five-star restaurant. It has a view and a dream.