Curling is a very very old game and was invented by bored Scottish weavers throwing their loom stones down frozen lochs in the 16th century. One can only assume alcohol was involved.

Today it is a serious sport with important championships, a place at the Olympics, and a miasma of rules and regulations. Not as sexy as hockey, it is its laconic little brother. As I write, the World Curling Federation ranks Canada first in both teams. Not to worry: Switzerland holds a totally respectable 2nd place (women) and 5th place (men). This is entirely due to the lack of Scottish roots in Switzerland.

One memorable winter I was skip of my high school curling team. I wore my stretchy nylon ski-pants, snow boots with lots of socks, and a thick woolen sweater knit by my grandmother back in the Old Country. It even had a maple-leaf motif. Training took place at the local skating rink. The ice was smooth–chipped here and there from a previous hockey match or free-skating session. 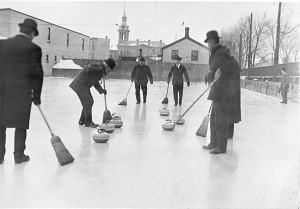 Men Curling in Toronto 1909
The broom back then was not the straw broom of pioneer days, but a special curling broom made with a bunch of long stiff hairs. For me, it was entirely a fashion accessory, as everyone knew that it did absolutely nothing except get bits of powdered ice or the occasional cigarette butt or bottle cap out of the way of the majestically moving unstoppable stone.

Years later the broom was replaced by the legendary Rink Rat, and then a sort of floor scrubber, and now, as I’m sure you are aware, high technology has invaded the pitch, and controversy is swirling in the curling world.

This concerns the new-fangled specialized IcePad broom being made by two Canadian companies. It contains directional fabric, and really helps control the path of the stone. The players who dislike it (or are jealous of it) say that it takes away from the skill of the thrower and the athletic brushing techniques of the conventional sweepers.

As the winter 2016 curling season begins, the World Curling Federation has been asked to take a stand and has recently brought in a few tough new rules concerning championship curling brooms: They cannot be waterproof, they cannot contain stiffening inserts, and you have to be able to buy them at your local hardware store.

At the moment it’s Rocket Science 0 / The Luddites 1.