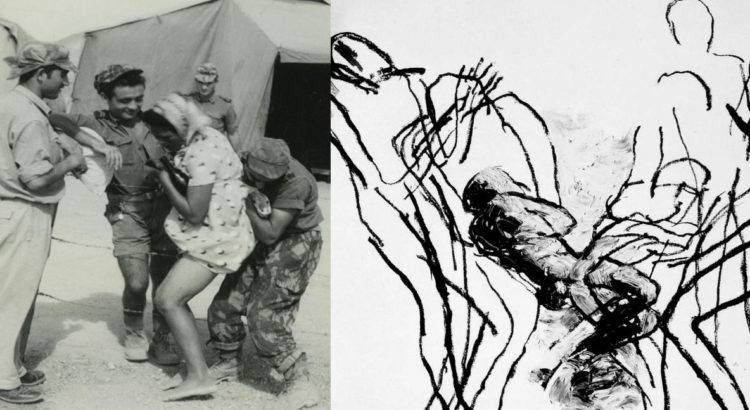 Colonialism travels. Back and forth.

Usually thought of linearly, colonial practices may be best understood in a logic of cycles. Such perspective can help us see more clearly the problematic seesawing of a dispossessive history whereby France is seemingly unable to unlearn its colonialism.

The policy actions and declarations of President Emmanuel Macron about Islam during the autumn 2020 were but the latest in an unceasing French obsession with a religion and a community. Such idée fixe masks, however, the larger and more important contextual issue of the persistence and mutation of the legacy of French colonialism.

What can be assessed as repeated state-sanctioned stigmatization of a community of French citizens, whose religion is Islam, is neither accidental nor merely the positioning of one politician surfing on populist and racist waves ahead of an election. Rather, such current affairs partake of a more historically-consequential pattern of a prevalent mindset. Over the past decades, French authorities have repeatedly shown their inability to shake-off discriminatory controlling practices. These tropes, systematically and systemically dominant throughout the colonial era of the country, are today reemerging under the convenient guise of ‘security’ and per a narrative of preventing ‘threats to the republic’.

In this context, the current discussion about French policies being merely a particular understanding of laicité one has to understand misses the larger point. The one-dimensional story of variation on secularism is euphemistic and incomplete. Denoting sympathy for the French travails with ‘their Muslims’, it indulges the self-serving posture of a specific radical interpretation of that republican value and, rationalizing its excesses, moves to elevate exclusionary logic to democratic necessity.

The deeper issue is that France is a country that remains stuck in a colonialism-influenced mindset. The direct control of African, Arab, and Asian lands may be gone but the paternalistic outlook on these individuals’ culture “of origin” is not. Provenance-fixation and religion-exceptionalism are the keys to understanding today’s republican racism in what Jim Wolfreys calls “respectable racism” in the French Republic of Islamophobia.

“Radicalization” and “separatism” are today the culturally-coded vernacular of the neo-imperial state, part of a phraseology portfolio including “integration” and “assimilation” – a panoply all along used stealthily against l’ennemi intérieur who is also, then and now, l’ennemi intime.

If indeed there is a French particularity relevant here, it is the one of the French resistance to address its colonial past. The impact of that past on the ways through which the French state deals today with the resulting societal composition in the aftermath of decolonization is arresting. It is precisely this combination of amnesia, taboo, and editing of colonial history that presides over the current authoritarian and discriminatory policies towards Muslim communities.

Revealingly in that regard, French historians took a long time before turning to the World War II collaboration period. It was an American historian, Robert Paxton, who, first in 1966 in his book Parades and Politics at Vichy and then in 1972 in the follow-up Vichy France, initially articulated the extent of the French government role in the deportation of French Jews during the occupation. (Parades and Politics was only translated in French in 2003.) The human depth of that experience was as well told by the Anglo-Hungarian author Arthur Koestler in his The Scum of the Earth in 1941, amongst others.

Colonialism is similarly “another story of amnesia”. Not only has the public debate in France not come to grips fundamentally with the racist manner in which the French authorities have – through an artifice of administrative techniques, cultural coding, and media pronouncements – continued after the 1960s to perpetuate a practice whereby ‘the Muslim’ (a category de facto synonym with “Arab”; “the two are routinely conflated, making it both necessary and impossible to try to separate them” points out Ruby Hamad in White Tears, Brown Scars), but today the questioning of this history is painted as suspicious intellectual inquiry. In February 2005, the French government adopted a law demanding that teachers at schools all over the country and textbooks emphasize “the positive role” French colonialism played overseas, especially in the Maghreb. Today, instead of fighting systemic racism, France wants to reform a religion.

Forgotten and invisibilized is the colonial subtext of this sequence. Post-decolonization France featured several important episodes of violence against Muslims and Arabs. On October 17, 1961, Frenchmen and women threw an estimated 300 Algerians to the Seine who had been peacefully demonstrating for independence. As the filmmaker Michael Haneke captured it in a film-à-clef, the ghost of this history still remains Caché in contemporary and allegedly post-racial cosmopolitan Paris – yet merely hidden for all to see. Ratonnades (a term coined to specifically describe physical violence against North Africans) took place throughout the 1960s and 1970s. In her 2020 novel, Marseille 73, Dominique Manotti tells the story of such normalized societal discrimination, today’s forgotten bloody violence. Then as now, such racist witch-hunts took place in the context of economic crisis. From the 1970s to the 1990s, some estimated 200 cases of ‘Arab killing’ were unearthed by Fausto Giudice in his Arabicides (a unique investigation, which Chris Woodall remarks in Race and Class “has received scarcely any attention”). Since the 2000s, amidst the global post-9/11 era, Islamophobia gained footing in France.

Emmanuel Macron in the 2020s, François Hollande in the 2010s and Nicolas Sarkozy in the 2000s have rejected accusations of being opposed to Islam. They claim that their defense of secularism is religion- and color-blind. This is misleading. Asking a segment of his society to hide any public sign of their religion, Macron publicly celebrated another. The policies adopted by the French government on this front have demonstrably and increasingly been concerned with one religious community: Muslims. Above and beyond police clampdown on mosques, in an unprecedented move, in November 2020, the French government demanded that Muslims sign a ‘charter of republican values’. Upping the Orwellian ante, it moved to introduce a National Identification Number meant to trace in particular the schooling of Muslim children and in effect criminalizing home schooling.

Observing the manifestation of such state-led discrimination as ‘policy drift’ or reaction to ‘radicalization’ blinds us to the go-to tactics French power is making to align itself on a history of martiality towards what once were ‘children of immigration’ and are now – or indeed have been for a while – French citizens.

More importantly, ‘the republic’ is here a term concealing the privileges of the non-ethnicised population. Such currency has been successfully used to banalize racism against Muslims. Today’s democratically-degenerated language perpetuates the negative representations of Islam, which, Olivier Le Cour Grandmaison and the late Jalila Sbai remind us, were developed per a long pedigree of French academic, scientific, literary, and political elites since the nineteenth century.

What the French colonial history has produced is not so much secessionism, as disingenuous alarmist Macron would have it, but rather a repository of real and symbolic violence which can be unleashed against any group decreed to be in communautariste opposition to the values of the republic. Further down the historical rabbit hole, the 2020 flare-up in French Islamophobia carries on not merely a modern colonial history but a longer history of hatred, as Jacob Rogozinski traces it to the literal medieval witch hunts – processes time and again concealed behind the law.

What Frances needs today, to escape such long and divisive shadow of colonialism, is to practice what Ariella Aisha Azoulay calls potential history, that is an unlearning of its regime of past and recurring discriminatory ways.