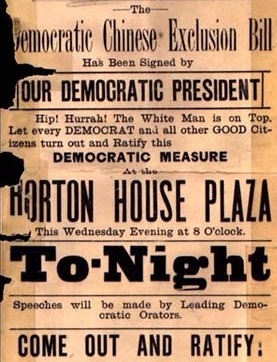 On January 21, 1996, the New York Times published a story entitled “Seeing Green; The Red Menace is Gone but Here’s Islam”. Five solid years before the events of ‘9/11’ forcefully unleashed a global moment in that direction, Islam had already been introduced or decreed as the new enemy – of the West, that is.

Notwithstanding the problematic nature of the “Islam vs. the West” construct, the reality is that the artifice has been successful beyond the wildest dreams of its proponents or adherents, from Bernard Lewis to Niall Ferguson by way of Samuel Huntington and Francis Fukuyama.

Close to a quarter century after that self-explanatory essay by Elaine Sciolino substituting midway into the post-Cold War the Muslim to the Communist as the needed bête noire (et marron), anti-Islam feelings have now vastly expanded across the world as discrimination, repression, and hostility towards Muslims have been routinized. In the event, Islamophobia features now as mere background noise of international politics.

In his new, paradigm-shifting book Europe and its Shadows – Coloniality after Empire, Hamid Dabashi offers a key insight on the misleading and skewed nature of the ideological tenet that has underwritten this past and current phase of global politics. As he writes: “In what particular way can the 1,400 years of civilizational unfolding of a world religion be summoned into just one word, ‘Islam’ – placed next to the allegorical gathering of a recent imperial concoction called ‘the West’ and offered as the towering binary of our time – be the explanatory frame of reference for the current events?…What happens to historical accuracies, analytical nuances, judicious cultural comparativism when it comes to ‘Islam and the West’”.

Such nuances and accuracies, as the Columbia University professor terms them, are indeed now widely absent, and the ‘Islam as a problem’ narrative has been normalized. As seen in the current flare-up between the United States and Iran, the cultural-religious narrative features alongside each new geopolitical crisis playing out in the region. It can be summoned or it can surface on its own, at will.

How did we get here?

To be certain, the colonial and the post-colonial experiences are the heart of the matter. Foundationally, however, it is the years following the Second Gulf War of 1990-1991 that had allowed the George H. Bush administration to turn the initially-empty-slate post-Cold War into a period of military interventionism in the Middle East. What had been done in a limited way and indirectly by way of the decade-long United Nations embargo on Iraq was then unleashed directly in 2003 with the George W. Bush administration occupation of that country.

Since then, and as the successive stories of Al Qaeda and the Islamic State materialized, the so-called 9/11 wars in Afghanistan, Iraq, Somalia, Libya, Yemen, and in the Sahel all played out back-to-back amidst a religious theme. By the time, President Donald Trump announced in January 2016, a racist ‘Muslim Ban’, the ground had been laid for the acceptability of that discriminatory measure.

Whereas that Trumpian high point of unprecedented contemporary institutionalized animosity towards Islam could have been a marker triggering de-escalation, it stood rather as the harbinger of a more insidious insertion of that disposition in the fabric of global politics. And so over the past three years, rather than simmering in Western societies, particularly those with a colonial past or an imperial present, the anti-Muslim bias traveled to Asia or resurfaced thereabout. Better yet, it was accompanied by tolerance of it in…Muslim societies.

Under the leadership of a former Nobel Peace Prize winner, Myanmar has been perpetrating a modern-day genocide against the Rohingya people since 2016. In parallel, China has been conducting another genocide on the Uighur community, sending millions to so-called ‘re-education camps’.

The crimes of Myanmar – which included infanticide – and of China on these Muslim groups have been widely reported and denounced by the United Nations, the International Criminal Court, human rights organizations, investigative journalists and athletes. In November 2019, the New York Times released 400 pages of leaked internal documents exposing the scale of the Chinese cultural genocide against the Uighur of whom reportedly three million are held in concentration camps.

By and large, however, these two genocides and Islamophobia more generally have been allowed to continue. Just as they did with the Myanmar ‘fallen icon’, many instead drew a line under the problem and moved on, sweeping aside dissonance in their favourite saviour narrative, and mezzo voce expressing ‘concern with Islam’, hardly dissociating the religion of one-fourth of the world’s population from its militant Islamist use. The tepidity has found itself replayed in social media where Facebook turned a blind eye on anti-Muslim hate.

It is in this degenerated context that India’s Narendra Modi was able to introduce in November 2019 a Trumpian Muslim Ban-like citizenship bill excluding Muslim refugees.

Not only have Muslim and Arab states not been vocal or active on this issue, but they have actually enabled and whitewashed it. It was not Saudi Arabia, where the holy sites of Islam are located, or the United Arab Emirates, which hosted a ‘tolerance’ summit in spite of their dismal human rights record, who took the initiative of filing a case against Myanmar before the International Court of Justice but Gambia. In July 2019, Saudi Arabia signed a letter defending China’s policies against the Uighurs. Earlier, in February, the country’s Crown Prince Mohammed Bin Salman, had already declared that China had “the right” to do so.

Such complicity and apathy in the face of fast-advancing anti-Islam policies and feelings is arresting at the dawn of a new decade. With those whose communities themselves are or have in the past been targeted by discrimination now onboard, one wonders what the next frontier is.