Well, it is summertime, and like many good Genevans, we find ourselves up in the mountains. We sit at altitude, smugly comment on the cool refreshing air, admire the view, and invite friends and relatives to come and share the good times. Some do. They help with small construction projects, eat fondue, fake injury (to get a ride up on the quad) and when they ask about the washing machine I show them the old Wyoming washboard and the zinc tub.

Our last guests came to help cut the grass in the lower meadow, but had to leave to attend a German Black Forest festival where they dress in elaborate traditional costume and parade through the village with a group of identically clad people.  And so here at the Shack where the clothes are decades old, often mended, but still holding up quite well, I ask myself why anyone would ever do such a thing.

If there is a costume here in the Vallée du Giffre, it would be the old agricultural workers’ blue jacket and loose pants than can be worn over top more normal clothing. A black beret formed into a cap to shield the eyes is optional. 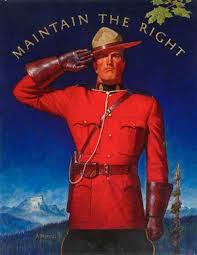 Maybe it’s because I come from Canada that I dislike and distrust uniforms—except for hockey uniforms, of course.  The police (always on the prowl for lawless picnickers), the Mounties (just plain silly), Hell’s Angels (that came and tore apart our village on Hallowe’en every year), the church choir (the green-black gowns never washed and smelling of musty mildew): All of it repels.

We Old World immigrants came to North America in the 50s and tried to drop our old differences, our old arguments, our old customs, our old clothes and to get on with being part of a newer, bigger idea. We adopted a more general uniform of sneakers, jeans, baseball caps and t-shirts. We all wanted to be just like everyone else.

Of course, cracking out of my rural cocoon into the big city in the late 60s, clothing anomalies immediately appeared: the hippies trying to be outlandish, the Jewish boys—a row of yarmulkes—all sitting in the front row of the university lecture hall, the Sikhs wearing their turbans on the Toronto streetcars.  I found it fascinating and frightening in its unfamiliarity.

Returning to Europe in the 70s the clothing situation here on the French-Swiss border was overtly political with the question of the burka, the headscarf and the burkini all making trouble—these items being (unpleasant) symbols of perceived religious oppression and civil non-conformity. More than four decades later that particular clothing controversy is still alive and well.

The solution is elusive, but I do recall a sight that made me gasp with pleasure. It was a few years back at Eid al-Adha and Muslims in a nearby French town were celebrating the end of Ramadan. Walking through an ugly concrete urban landscape was a band of people wearing sparkling white robes, glittering pink and purple dresses and shimmering scarves blowing loose in the wind.

They were proud and happy, and I wanted to be just like them.