The best hotel reviews are the worst reviews. Who needs to know about the deep delightful calm, the friendly helpful staff, the gorgeous breakfast buffet, the unbelievable sleep-filled mattress, or the view to die for?

We arrived in Estepona on June 4th, an auspicious date, by following the rental’s trusty hen through the spaghetti ring roads of the Costa del Sol. We had stopped at the world’s biggest supermarket on the outskirts of this once Phoenician/Roman/Christian/Moorish fishing village. A pedestrian foot-bridge spanned the motorway from the hotel to a Lidl and a Burger King. 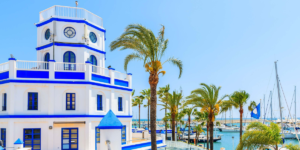 Rooms with a sea view on an upper floor had been requested, and this is sort-of what we got. The room was slightly warmer than the outside (heat wave) air temperature, and the coldest water from the tap was more than tepid. Neither soap nor drinking water was supplied.

Upon enquiry as to whether a room with a more straightforward view of the sea was to be had (Fawlty Towers came to mind), the Manager (who had a disturbing penchant for openly groping his female employees’ tightly pantaloned bottoms) said such affairs were entirely out of his hands.

Yes, he was busy. It was first-come, first-served. Mala suerte for you, loser! His hotel was FULL.

Lunch did not materialise as the snack bar worked on a QR code-reader-only policy and we didn’t have our phones. The staff did not know what sort of food they served. We were told to go downstairs and ask at the kitchen if someone knew.

The only other guests at the snack bar were a small family group. They had come across from the pool area and their various gigantic water floats were too big to fit through the door. Fortunately, they did not require any restauration as they proceeded on with their mattresses and crocodiles and sea monsters.

In one of the two gardens of the hotel, a blow-up plastic castle had been installed as a Saturday afternoon Confirmation was being celebrated. This meant that the adults disappeared for hours into the dark dining area while screaming children bounced themselves silly. Affairs reached a climax when about half the kids split off, regrouped on an upper walkway and threw their shoes at the bouncers.

Hectic live music followed, amplified to the point of distortion. It was loudly Latin in tone and rhythm. Hotel guests (previously hiding in their rooms to avoid the children) started to appear on their balconies looking tired and headachy. A couple of fellows who might have been at the naturalist beach earlier and suffering from heat stroke, wandered out starkers to see what the racket was about. That was the highlight of the afternoon.

Dinner followed as the Confirmation fiesta wound down. Birds were busy at the buffet, and fresh, multi-coloured, liquidy sparrow poop adorned the 5-star table cloths and napkins.

Our Andalusia road trip lasted two glorious weeks and the sloppy 5-star hotel served a real purpose in that, by contrast, its noisy, careless, dirty mess turned much humbler abodes into places of great wonder, beauty and stately tranquillity.