The elephant family looked like walking boulders: grey, round, and almost still as they slowly made their way to the Dolomite Point water-hole. There had been no rain in Etosha Park for more than 150 days. This is not climate change; this is normal Namibia.

In our cabin on the rocky outcrop, we strung our freshly washed underpants on a string across the doorway. They flapped a bit and were instantly dry. The red-dust spools of sand wind hoses blew into the room and the elephant group stopped as the little one needed a nap. In the middle of the flat leafless plane mom stood firm, her shadow her baby’s tent.

The teenage elephant was bored and chewed on some dried twigs. If she had had a comic book, she would have been reading it. The kid elephant looked like he wanted to lie down too—sibling rivalry flapped its ears. And the huge matriarch stood apart, keeping her eye out for trouble brewing on the horizon. Our small group of five, made infinitesimal water-hole progress.

We chased the resident mouse out of room #18 and inspected nibbled bags of nuts and raisins, ripped-apart tissues and shredded shirt collars. Sadder but wiser, with all suitcases firmly closed, we hiked to the observation point through the white-hot late afternoon sun. The friendly python was nowhere to be seen.

The giraffes and springboks skittered off as the elephant group approached. The baby had to be pushed into his new medium, water, as mom hosed him down and gave him some drinking lessons. He was just starting to get his aim straight when grandma signalled that time was up and the family backed out of the water-hole–all except for the little one who wanted to stay. Mom gave him the old heave-ho with her massive forehead.

As the sun set, our elephant family started its long hot amble back into the bushes for the night to get a couple of hours sleep. 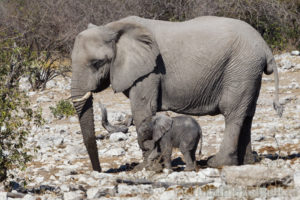 This is my favourite memory. Of course there were other encounters with rhinos (one fell in love with our little white car), giraffes and their calves standing tall and chewing on trees, wart hogs kneeling at the roadsides, impalas frozen in the middle of the sandy path, hippos hogging the water hole, and even a honey badger who was on an important mission so did not have time to stop and spray us.

In the park, it is the humans who are in the cages. You are warned never to get out of your car. You must not walk about outside at night. At a (rare) toilet stop on the park road you have to enter through a locked wire fence and close the gate after you. Once inside, a huge grey rock just by the entrance turned into a lone bull elephant who stood still as a statue for a time before wandering off.

There was no water in the toilets or taps. The sinks were full of sand.