Well, it wasn’t really my fault that I read the book. It was just an experiment.

My Kindle is my very favourite object. It is literally the only gadget that I have ever truly coveted and ordered for myself. A colleague, stuck in hospital for a spell, actually let me hold hers and “turn” the pages some years back and I was captivated.

So the day before yesterday, I just had a peek to see if I could buy the famous sold-out book by the journalist, Michael Wolff. It was available, so I made a snap intellectual decision to read it as quickly as possible before it could be withdrawn and disappear into the ether (this has happened to me before.)

I am ordinarily not a chaser of ambulances and dislike political exposés, but this one struck me as important considering the size-of-the-button situation. A child growing up in Canada during the Cuban Missile Crisis, having nightmares about having to hide in the village culvert not to be blown up, I am oddly scared to death of nuclear bombs.

Anyway, I now possess the complete mental low-down on the White House (and I am not talking about the Shell garage up the hill.)  I know everything about D.C. 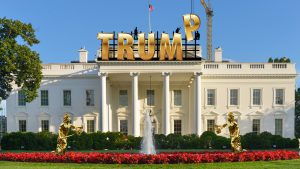 To those of us who have been following, unbelieving and mesmerized, the goings on of the American political scene over the past year, there is little that is startling or new. So, if you are not a committed reader, you would die of boredom quite soon. The names of the ex-staffers and presidential “friends” just go on and on.

There is very little juicy material (except a couple of cheeseburgers) to get your teeth into. As a teacher, I was saddened to learn that Donald does not know how to read which is why he has three tv screens in his (separate) bedroom.

Another interesting snippet is that Donald is frightened of being poisoned, and so, like a Roman emperor, has a cheeseburger taster—or, preferentially, orders take-out from McDonalds.

Then there’s the fact that for Donald, the White House is a definite accommodation downgrade. His luxury triplex in Trump Towers in New York, makes the Washington presidential mansion seem like a shack in the woods. The perks of bowling alley, cinema, and plane are not interesting or overwhelming (as they would be almost any other person) as he already has any of this stuff he wants.

But what really caught my fancy is that even his height is fake. He has added inches to himself to squeeze in beneath the “obese” scale of the BMI. He claims to be something like 8 feet tall.

Of course, all the routine stuff about the FBI, the Russians, young women, the concept of Trumpism, the definition of an idiot, the Kushners, Bannon, the generals, money laundering, fluffs out the story and gives it a bit of a political slant.