The Canton of Geneva is a source of constant hilarity to the other 25 cantons of the Swiss Confederation. Various local politicians go out on shaky limbs, plan unending projects, pull repetitive bloopers. These absurdities (Genevoiserie in French and genferei in German) are well-documented and there is an official web-site (http://www.genferei.org/) that is guaranteed to make you laugh out loud in these cold wet windy January days.

Some of the simpler genfereis include planning to build apartment buildings inside highway cloverleaves, planting the wrong (not growing) sort of (expensive) grass in the football stadium, hiring artists to paint designs under the trams at the tram stops, or modernizing the public transport system so that no one can figure out how to get to where they used to go.

Creativity, foresightedness and complexity are essential ingredients in a jolly good genferei, as is spending lots and lots of money. The joke is even bigger if the federal government has been persuaded to join in.

To my knowledge, no one is ever really punished for a genferei; rather, there is an annual prize for the very best one.  In extreme and conflicting cases there could be a bit of finger-wagging, but as no one did anything bad on purpose, then these follies are written off as simply being part of the great human comedy of life. 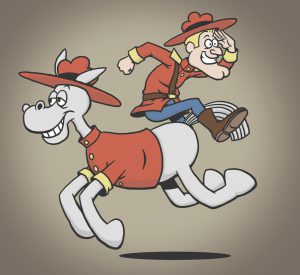 Now, last night’s national news (perhaps to become redundant as we are all voting in a few weeks about abandoning the federal TV and radio tax but that’s another story) had a small report that Geneva is currently forming its very own Mounted Police force. Nine police people are currently in Belgium on a week-long training course.

The news presenter’s smirk was a dead give-away: the story has the makings of a perfect genferei.

Coming from Canada, the idea of tall strong men on horses bounces off my spirit and images of the Royal Canadian Mounted Police rise up: the red jackets, the flat-brimmed hats, the stiff upper lip, the impeccable black horses, the Musical Ride, Dudley Do-Right.

Of course, the Canadian Mounties no longer use horses operationally and from what I have seen a horse’s role in law enforcement in the 21st century has to do with urban patrolling and crowd control. Getting blown on by a big, smelly, uncouth horse would make just about anyone drop whatever they were doing and go home.

But no. Geneva’s Mounties are predestined to patrol rural and suburban zones. They will saunter bucolic bridle paths and gallop the frontiers. They will drink coffee at the garage up the hill. They will enforce finicky dog-poo laws and check on candy-wrapper litter.

They will be regularly sent on international training courses to acquire more equestrian skills. They will eat sparingly, I’m sure. Just a sprinkle of federal funding (transportation, perhaps?) and a most beautiful genferei is in the makings.