Well, the conversation took place over the regular Tuesday lunch of macaroni and (cheddar) cheese. As we put a grind of pretty pink rock salt on top, the question of salt came up (again).

In our house there is an on-going polemic about the reality of salt. The scientific contingent is adamant that salt is simply NaCl—preferably from the Swiss salt mines of Bex. And that is that.

The rest of us disagree. We know that licking the Himalayan rock-salt lamp in the living room is a completely different experience from dipping your wet finger into the kitchen salt pot.

And now I have proof. A recent cookbook defines the developed world’s three types of salt—common table, kosher, and sea—and proclaims them to be very different in taste, texture and use.

Conversation then turned to the iodine content of normal table salt.

The mention of iodine brought up the subject of hypothyroidism and goiters and my dining companion (10 years old) asked if I had ever seen pictures of people with goiters. I said, of course! I have a lovely one of Geneva market ladies in the 19th century in my book.

The mention of “my” book, brought about dessert amnesia, and we headed upstairs in search of the living proof that grandma wasn’t the big fat liar that she is usually (unfairly) made out to be, but is, instead, a real living rock and roll “écrivaine”. 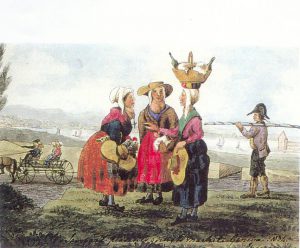 One of my few remaining copies of Ils ont découvert Genève was dedicated to my new fan and she took it with her. In the car back to school she abandoned her usual heap of Lucky Luke and Yoko Tsuno reading material and concentrated on Chapter 1 – Le Lac. Out loud, I was regaled with my very own true facts about the origins of the names Geneva and Leman.  After the 20-minute drive, I was heartily congratulated on my newly-discovered brilliance and expertise.

The book itself was a huge failure and a roaring success. It is a segment of a much larger (unpublished) work and was brought out as a commercial anniversary present for the “big M” and distributed throughout the canton of Geneva. You just might have it on your bookshelf. It took years of work, and ended in disappointment and frustration.

Under-rated and none-paid, Travellers to Geneva[1] has been more or less forgotten. But today it was excitingly revived, hailed and admired.

Nothing you do is worth nothing. Not even a pinch of salt.