Down in the bomb shelter there is a rusty tin biscuit box that is full of postcards. They were collected and saved when I was a child living in small Ontario villages. They were sent from around the world – well, mainly from holiday corners of Britain and “The Continent.” Every move I’ve made, that tin box has moved with me.

Our own parson-poor holidays were always taken for four weeks in the searing summer heat. They were mile-full rides across the country from coast to coast. Cloth diapers were jammed into the little triangular side windows to dry in the car-speed. We camped in a huge and heavy canvas tent. There was porridge for breakfast and our wine was grape kool-aid.

We did, though, send postcards.

Still today, I occasionally buy old postcards at the Geneva flea-market and unravel the spidery handwriting with pleasure: formal invitations, formal thank-yous, formal salutations. They are little pastel-coloured hands waving from the past.

Suddenly, though, postcard quests are not being met with success.

In Tranquebar, the cards were so cracked, curled and dirty that not even the mercurial manager could take rupees for them and gave me a few for free.

In Ubud, the former postcard capital of the world, postcards had to be mined like precious gems at twee stationery shops.

In Xi’an, at the main airport post-office, there was a selection of cards featuring hybrids of fat babies and Micky Mouse. Not a terracotta warrior or plump horse in sight.

At Wat Pho, the postcard racks were empty. And here on the Andaman Sea, the hotel offers postcard views of itself. Here we step into serious postcard total-loser territory. 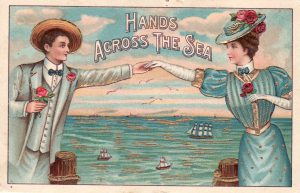 Where are the great images – the sunrises, silhouettes on a crescent moon-lit beach, the branches of fuchsia bougainvillea draping impossibly over a wine-dark sea? All those exciting things that we never see with our own amateur eyes?

The clientele here at this eco-lodge are a new breed of adventurers; they possibly have never licked a stamp. They are all tattooed to prove their individuality. They spend their time thumbing their little screens. They sport pairs of outsized non-jiggly breasts with heads and skinny legs attached. They do not sketch, paint, or write. Very few read.

Yesterday, a cool American dude blew in with his chick and his drone. Inside the veranda filled with real people on lounge chairs he ordered a double gin and tonic and launched his millennial man-toy.

Not wanting my eyes poked out, I was gathering up my affairs to leave as I watched the girl lower herself into the infinity pool and gaze through bug-eyed sunglasses over the sea as the drone circled her, filming her, before returning to its master.

The postcard is definitely out, but once drones completely take over the world I do hope they do not take pictures of themselves, but nostalgically reinvent the paper postcard, take lovely and unusual pictures, and send them to each other. By drone, of course.