There is a canton in Switzerland called the Valais. I once had a female colleague who came from there, and she went back to “her country” every single Friday afternoon. Having just spent a weekend in the Val d’Hérens, I am thinking of emigrating myself.

It’s all about attitude, of course. The real people of the Valais have perfected a potent mixture somewhere between a cowgirl and a Hummer: courage, independence, pride, strength, a grouchy exterior, an ironic interior and, often, a glass of génépi define a true Valaisan.

The landscape of the Valais is mixture of the Himalayas (now that there are yaks and this summer’s huge outdoor walking path photo exposition of Zanskar*) and The Sound of Music. You snuggle into the wild and the gentle, the rough and the soft and, amazingly, feel right at home.

You’re scared to leave a crumb on your plate of steak and cheese-rösti (with rinds), as the chignoned-madam-owner of the Vieux Mazot would be sure to openly disparage your finicky appetite and picky town ways. Packed tight into her Valaisan dress you’re greeted with a hauteur bordering on disgust. Having proved your appetite and your manners, you are given a handshake an 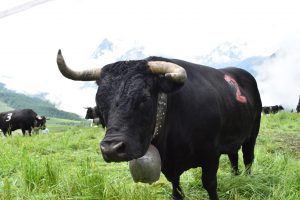 d a half-smile on the way out.

You want to belong to the Valais. You want to be part of them. But you need credentials. Being a city slicker foreigner does not endear you to the crusty old men with morning wine-breath and sturdy cow-sticks.

You explain your presence at the foggy Inalp (the early-summer migration of the cows up to the high alpine pasturages) by telling the story that you once, some 35 years back, tended a herd of cows up in the Val de Réchy. It snowed in July. Food had to be helicoptered in. There were holes between the stones of the hut where you stayed. The cat caught and ate a mountain rabbit. It left the ears. The child had to be rescued from a mountain stream. Another ear (with identification tag) had to lopped off a cow who had fallen off the rocks to her death.

This cinches matters, of course, and once your Canadian identity is established you’re part of the gang of pipes and caps and canes. An ancient one pulls out his list of cow owners and points out #2 who is Queen of the fighting cows. Proud, and strong, and still, and black. Much like a Hummer with horns. You don’t want to look her in the eye.

In the evening from the hotel balcony you view the night-lit church steeple across the road. The doors are not locked, and the pub-girl waters the flowers. There is a single village shop which the hotel lady calls a souk. She says you can buy anything there: rumour has it, even a bride.

We bought a corkscrew and a bottle of Heida. Next time I’m going to buy a Valais passport because I want to live next door to the Queen of Switzerland and keep a baby yak in my garden.