In France, a sandwich for lunch is a sign of both culinary and moral failure. Of course, living in the Geneva countryside you can sometimes sneak in a peanut-butter-and-strawberry-jam-and-bacon-sandwich and no one will ever be the wiser—except, perhaps, your tattle-tale ever-expanding waistline.

So, attention must be paid, and proper French lunches addressed as often as possible. In fact, you can eat almost nothing, and it can be delicious.

Once upon a time, in the south of France the old mother of a friend used to cook for us. Protesting at her bustling morning activities—up early to the market for fresh products, working in the cool kitchen for an hour or two—she explained that what she produced was entirely ephemeral.  The soup was just water. The spinach soufflé was just air. The gigot was just the thinnest of slices. The fromage frais was medical (calcium). As was the fruit (vitamins).  There was a big basket of fresh bread on the table, just in case anyone was hungry.

Sitting down to eat is healthy, as are starched tablecloths and napkins. A serious lunch is eaten indoors where you are protected from the sun, insects, and deadly draughts. Only tourists, children, and bohemians eat outside. Knives and forks keep reflexes sharp and wrists and fingers strong. Bubbles in the water promote digestion and a glass of red wine successfully fights many many diseases. 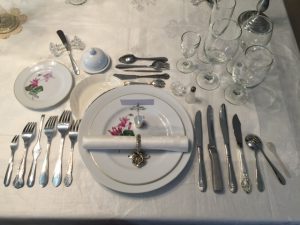 Menus are highly coded and there are a few basic traps.  For example, both façon grandmère and à l’anglaise means boiled in water which is often not so good.  We once had pork chops and vegetables cooked in this manner and the slop on our plates was exactly what we had ordered. You learn quickly.

Of course, there are occasional hideous surprises. A lunch in a small rather shabby mountain-village restaurant recently offered beef cheek stew as their plat du jour.  The cook (who hitchhikes to work) hadn’t been offered a ride early enough, and his cheeks had not spent a sufficient amount of time in the pot. They were extremely chewy and we spent some time trying to swallow them whole.

I was working on flattening them out and hiding them under my mountain of rapidly-cooling pasta spirals when a lady at the next table called over the owner/waiter/manager, and explained, pleasantly, that her knife could not cut the meat.  He dropped everything and tried to saw apart a big rubbery chunk. He failed, and then, along with the whole table, burst into laughter. The meal was officially inedible which was jovially accepted as an accident of life.

Relieved, and then restored and fortified with a café gourmand (a strong black French espresso surrounded by three little delicious deserts) we left happy and sincerely promised to return.

A French lunch out is a meal of hope and possibility. It takes time, and, occasionally, tolerance. And you must always keep in mind that if your beef cheek stew is tough today, it will probably be much better tomorrow.