I’m just reading my village newspaper and I’m not feeling very well. I have been shocked to find that my local Farmers’ Wives Group (Les Dames Paysannes) no longer exists. The reason given is that the population has increased, mentalities have changed, and modern people have different interests. Bah Humbug.

I had always dreamed of joining the farming ladies. Even though I’m not married to a farmer, I thought I could have somehow swung it due to my obvious love of nature and knowing the names of at least three sorts of birds that live in my garden.

I was looking forward to baking my famous lemon cake and banana bread for countryside fêtes, and tastefully wrapping Christmas presents in St Bernard dog wrapping paper for the schoolchildren.

All across Switzerland these groups of women were created towards the end of WWII, as the girls had been running the farming show while the menfolk were away defending the Swiss borders.

Instead of Rosie the Riveter, Switzerland had Heidi the Hay-Flipper. 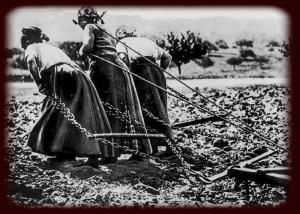 Now, of course, the new vocabulary surrounding this still-extant society has to do with sustainable agriculture, promoting countryside values, and offering local produce for sale.

All of this comes on the day that six little cows have been placed in the next-door field by the farmer from up the hill. They are cute. They are clean. They have friendly long tongues. They are also extremely smelly.  Cows in this world produce enough methane to be responsible for 14% of global warming. (This is a true fact).  Of course six little baby bulls do not constitute industrial farming and I’m sure that they only burp and fart when they really have to, but they do make a difference in the air quality at this end of the village.

Of course we should eat vegetables to save the planet as the carbon footprint of a carrot is zero, and chickens are recommended as a protein source as they do not have four stomachs all bubbling away simultaneously. They (and fish one presumes) are prone to much less anti-social gassiness than cows.

So, back to the village brochure after these agricultural ruminations, I study the photos of last year’s Hallowe’en festivities, followed closely by the Escalade party, all the monthly pot-luck brunches, and revel in the exciting news that Sunday dances are perhaps going to be organized. A small brewery has been opened, the village won second prize for its floral displays, and a week without television is being organized.

With a clothes pin on my nose I’m planting flowers, practising my dance moves, and not watching TV.

And when I’m finished, I’m going out to find that new brewery.