I subscribe to an important international American newspaper. I have even written for them. However, in the past couple of weeks they have run some questionable articles on the triste affaire of not one single Canadian team being in the Stanley Cup playoffs this year.

We’re talking hockey here, of course, and it’s a scandal.

It’s not my fault that I’m a Maple Leafs fan. I came of hockey-awareness age in the 1960s in southern Ontario, and Hockey Night in Canada was a Saturday evening ritual of intense physical and emotional pleasure.

Those winter evenings are firmly and forever engraved in my mind. Our father, the village minister, having finished his sermon preparations customarily went over to Simpkins General Store and brought home a 6-bottle cardboard case of soda pop. One tiny little glass bottle each.

After Saturday supper, we then bathed, arranged our hair in rollers or pin curls, put on our flannel pyjamas, and opened the doors of the arborite-encased black and white TV.

We followed our favourite team with fervour. Our father’s repeated expression “The ref must be blind!” was incomprehensible, but we all shouted it with gusto whenever one of our team got sent to the penalty box.

We learned to spot an off-side; knew all about icing, tripping, boarding and checking; and suffered nail-biting agonies during a power-play by the enemy.

The players were mostly helmetless, and had no front teeth.  The goalies had faces full of scars. We loved them all. 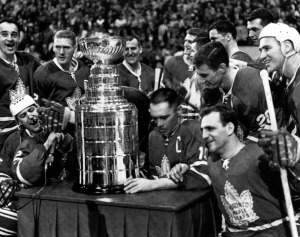 The great challenge was to try to make your soda pop last through the whole game. Or at least the first period. This was almost impossible, and with the thick green glass clinking against our front teeth the lukewarm dredges at the bottom usually disappeared before the first goal.

During the school-week hockey was kept alive with hockey coins (in packages of chips) and hockey cards (in bubble gum envelopes). There was Red Kelly, a Toronto MP when not on the ice and, thus, forgiven for being a wimp and wearing a helmet; Tim Horton, of doughnut fame; and the goal-rich Frank Mahovlich.

Indoor recesses (when the weather was too cold and icy to go out) revolved around tossing hockey coins against the wall.  I once possessed a most coveted and the very rare goalie coin (Johnny Bower) and enjoyed great popularity with the boys for a brief period of time until the inevitable happened.

My inner hockey-player was conceived during those exciting times and was born when the Leafs won their third successive Stanley Cup in 1964.

And, so, important international American paper, just shove that mouth protector back in and go sit in the penalty box for a few months.

I’ve got much better things to do than read your snarky hockey articles or waste my time watching trivial games played by unimportant teams.  I’m going to Niagara Falls.