A few weeks back I bought a nifty little German Christmas cake: a stollen. It was made in Dresden and was completely authentic. It even had a seal and was signed by someone. It was expensive and wrapped in golden foil.

Unfortunately, it accidentally got eaten shortly after its arrival due to a social emergency that featured family members, little cups of espresso, Japanese roasted-rice tea and a Sunday afternoon. The cake wasn’t all that wonderful – in fact, it was dry as saw-dust and I seem to remember my grand-daughter licking up piles of crumbs from the table.

Where I come from, baking a Christmas cake is a spiritual experience. You need a spell of “fruitcake weather” and a Christmas cake happens. The cook, inspired by the cold and snow, has sudden visions of a good solid piece of heavy sticky fruitcake in her hand. This year’s weather has been too warm, the cook (in her shorts and sandals) was uninspired.

Feeling I could improve on the Dresden stollen, I consulted my husband’s family-heritage Koch Buch written in 1966 by Elisabeth Fülscher in Zürich. This door-stopper features 656 pages of delicious Swiss German food – geschnetzeltes Kalbfleisch, Haferauflauf flockensuppe, and Dampfkochtopf—but, sadly, is written in German, so a person has to invent bits of information from time to time.

I found Weihnachtsstollen (Recipe #1651) on page 560 – tucked away between the Hamburger Kloeben and the Streuselkuchen. Seemed like a piece of cake – a sort of fruit bread that needed to rise twice then be baked in a medium oven for about an hour then covered in powdered sugar.

Well, I don’t know what Elizabeth was smoking back in 1966, but in her recipe, after kneading for hours, you divide the dough in two, roll them to the size of plates, then take one, fold it over itself and let it rise again. It seems the other half is discarded.

I checked on t 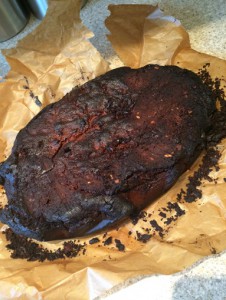 he web, and that side-tracked me even further, as other people add other things to make their stollens even more delicious. The most fascinating addition was the clump of marzipan that could be lodged in the middle and would make a wondrous surprise.

So I have made a super-stollen. It has everything in it – both halves of the dough, rum-soaked currants and raisins, three sorts of candied fruit, and a hunk of marzipan. The only thing I didn’t add was the drop of rose-water because I didn’t have any.

Well, the stollen rose reluctantly overnight down the basement. I then placed it on a chair in front of the oven so it could watch the Christmas cookies baking and get into the mood. It rose a tiny little bit.

I have just taken it out of the oven, and it’s not a pretty sight. While baking it has to be basted with butter (much like a turkey) several times so became quite a dark brown on top. One of the side walls split into a strange geode-type formation and quite a bit of fruit spilled out and burned. It has a mysterious crack through the middle on the diagonal.

The powdered sugar worked wonders, however, and the brown lump is looking quite a bit more festive. Now I just have to add the holly sprig and hope.