Well, if it had been April 1st, I would have thought that it was the joke news story (this is a cunning Swiss farce played out annually to keep us on our toes.) But it’s not; I’ve checked. So it seems to be true that the Swiss post office (fondly known as the Yellow Giant) is getting set to deliver parcels to people on Sundays via taxi. The postal spokesperson was interviewed and she said that they had to move with the times.

I have had a close financial and emotional relationship with Swiss Post for the past 38 years. Being from Away, means that birthdays, Christmas, books, and clothes have all been serviced for me by them. There was the famous cracked tin of Canada No 1 maple syrup that had leaked right through the cardboard box and had bits of other peoples’ letters and Christmas cards sticking to it. There was the 5- gram over-the-limit parcel that I opened, ate a chocolate, and repacked right at the wicket. I have argued about the sanity of sudden new rules, and have made militant post office buddies. 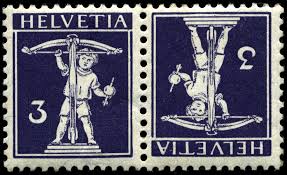 The post office in my village closed a few years back. Then the one in the next village closed. The one in village #3 is probably hanging on by a thread of envelope spit.  We drive closer and closer towards the city looking for real live people to help us fulfill our postal possibilities.

The stoned postman (who was an extremely cool part of the long-lost village postal team; he used to hide my mail in the garage) has given way to a brisk young man, who seems to be hurried, harried, and always running late. He delivers parcels if we’re at home; throws them over the fence if we are not. I asked him about the Sunday taxi delivery service and he said he knew absolutely nothing about it. I mean, they don’t even deliver parcels on Saturdays, so how can Sunday be a sudden delivery-day imperative? Everything in the canton of Geneva is shut on Sundays–well, except for the cantonal garbage dump, but that’s another story.

Anyway, I’m looking forward to my theoretical Sunday parcel deliveries. I wonder where I will have to go to collect my parcels if I’m not at home? I wonder if they will use illegal Uber taxi drivers as they are cheaper?

I wonder what they will think of next.