I’ve just been asked to prove that I am alive. I have until the end of the month.

I thought I had done this at the beginning of the summer by signing a form with my very own signature swearing I was alive, dating the document, putting my return address on the back of the envelope, and mailing it back. Any run-of-the-mill forensics expert could have checked the DNA and fingerprints. Don’t these people watch NCIS? Anyway, spit and handwriting were not good enough; they need official civic proof—a witnessed signature, a passport, and the village/community stamp.

My husband (who is much much older than I) was smugly satisfied with this nasty turn of events. He has NEVER been asked to prove that he was alive. He says it is to prevent dishonest relatives of dead people from collecting their pensions.

Well, I don’t know who would want my tiny little miniscule early-retirement pension (I am nowhere near old enough for the proper state pension), but it has caught someone’s administrative eye, and I feel a bit like Tom Sawyer attending his own funeral though I don’t quite know why. 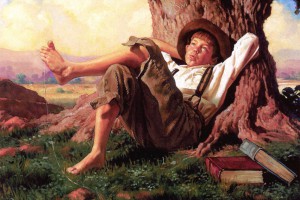 However, upon checking, I see that there are some grizzly shenanigans going on all around us—hundreds of thousands of ghost pensioners have been dug up, so to speak, in southern Europe, Uganda, and Pakistan. I wonder where they put all the bodies? There are only so many closets to be sealed off, walls to be doubled, freezers to be filled, or compost heaps to be plumped up. Don’t doctors miss their elderly patients? I found myself in a medical waiting room yesterday and everyone seemed to be about 120 years old, wearing hand-knit sweaters, fumbling with canes, glasses, and elevator buttons.

So, anyway, wishing to remain in the land of the officially living for a while yet, I went round to the village hall and got an official Life Certificate. I asked the secretary if she wanted to touch my arm to make sure I wasn’t a Whitney Houston-type hologram. She didn’t think I was funny and gave me an elaborate hand-written receipt for my 5 francs.

A small price to pay for living proof.