I have sworn off foie gras for the foreseeable future.

During yesterday’s afternoon walk through the muddy horse-pooped paths of the Geneva countryside, a vision came to me. Enough of the spaghetti bolognaise, the raclette, the Indonesian stir-fries, the pork chops and apple sauce. We were going to eat something unique and special; something I’d never tasted before; something of opulence and splendour.

We were going to sample that all-time French classic, Tournedos Rossini.

In my defence, I think the hallucination came from a touch of “cabin fever”–that well known Canadian wintertime medical event when prolonged isolation creates a feeling of claustrophobia, restlessness and paranoia. Anyway, the idea was not my fault.

To create a Tournedos Rossini, you first need a big fat chunk (800 grams) of beef fillet. The original recipe (created almost exactly 200 years ago by the famous French chef, Casmir Moissons, big friend of the foodie and opera-writer, Gioachino Rossini) called for a 8cm thick piece of tenderloin. Well, we had two rather thin slices of beef bought that morning from the supermarket over the French border. They would have to do.

Next ingredient was bread. No problem as there was a Grand Boule Campagnard resting in the breadbox. Then there was the 150 gm of foie gras. Also (Noël oblige) there was a perfect pack of two skinny rounds of duck liver only slightly out-of-date in the fridge.

Butter was required for all cooking stages (fortunately, there was an “action” at the Migros last week and I had four bricks.)  And to top it all off, 70 grams of thinly sliced Périgord black truffles were needed.  This final addition would have to wait until next time, as digging in the cold, dark, muddy garden was simply not an option. And it was agreed that the corner store probably didn’t carry them.

Unfortunately, there was the last-minute surprise discovery that a sauce espagnole demi-glace was required, as otherwise the whole concoction would be too “dry”. I don’t know how Casmir made his Madeira sauce, but I made mine with brandy and beef bouillon powder. (Tip: any good poutine gravy would work just fine.) 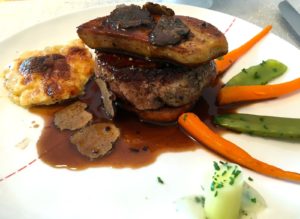 We started dinner with a simply boiled artichoke. This was to clean our livers and prepare them for what was going to happen to them next.

The cook retired to the kitchen and closed the door. Skillets and butter were distributed across the stove top, and the air turned blue.

As everything has to be warm and assembled at the last moment, there were a couple of glitches. One of the chunks of duck liver just disappeared, melting into mushy nothingness. The meat was a little tough (being only half a centimetre thick, rather than the recommended four.) But the bread and gravy were perfect.

For supper tonight I have a plastic box of vintage spaghetti sauce thawing out on the kitchen counter. It is a pre-cabin-fever creation dated October 30, 2020. There will be cheese on top.