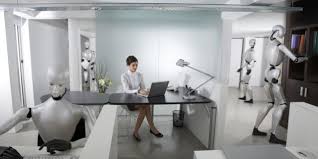 The fast pace of technological progress with the growing role of robots is fueling concerns for workers’ income. A subsidy paid to workers can solve the issue, but it should not be funded by a tax on robots. A value-added tax is better.

Assessing the impact of technical progress and the appropriate policy response is complex, as we need to take account of the interaction between several pieces: wages, investment, consumption, taxes, and more. Trying to think about the issue only verbally is near impossible.

Macroeconomic models are designed precisely with such analysis in mind. The allow us to focus on the key points and rigorously take account of the interactions between many variables. So let’s review what they have to say (I’ll spare you the equations and technical details).

Benefits and costs of technical progress

The rise of robots can be viewed as an asymmetric technological progress that boosts capital productivity more than labor productivity. I am more efficient if I can use a robot, but it boosts the productivity of other robots even more as they are directly complementary.

Such progress is clearly positive for the economy as a whole. The gain is however unevenly distributed and the income of workers can suffer. This tension between an overall gain and an unbalanced income distribution is more pronounced when it is easy to substitute capital for labor in the production of goods and services.

How technology impacts the economy

The gain from better technology simply reflects the fact that we can produce more when using the same quantity of labor and capital. The easier it is to substitute between these two inputs, the higher the gain: re-orienting production towards more use of capital allows the economy to take full advantage of the higher efficiency of this input.

Progress can also impact the distribution of income. First of all, it leads to a higher cost of labor relative to the cost of capital (1). Firms then adjust their production by using less labor relative to capital. A crucial point is the extent to which one can replace workers with machines.

The mast standard case in economics is the one where a 10 % increase in the cost of labor (relative to capital) lowers the labor-capital ratio (in terms of quantities) by 10 %. The two aspects exactly offset each other and the ratio between the income of labor (wages times employment) and that of capital is unchanged. In other words, progress benefits everyone equally. This stability of the income distribution is precisely why economists have focused on this case as the data show that the income distribution between capital and labor has been broadly stable until recently.

Robots however change the picture because they can take the place of a worker much more easily than machines could. A 10 % increase in the wage then lowers employment (relative to capital) by more than 10 %. The income of labor then falls relative to that of capital (and can even fall in absolute value). The easier it is to replace labor with capital, the larger the impact of progress on income distribution.

How can we redistribute?

To offset the worsened situation of workers we need to transfer income from labor to capital, for instance with a subsidy paid to workers. This is clearly a good idea, but one needs to be very careful about how we pay for this.

An option that is often considered is to tax robots (that is tax the income of labor). The problem with this tax is that it discourages investment, as no one is keen to accumulate much capital if the income is then heavily taxed. We can show that a tax that stabilizes the share of labor in GDP breaks the incentive to invest. More precisely, it puts the economy in the same situation as when labor and capital are not so easy to substitute (the case where a 10 % increase in wages lowers the labor-capital ratio by 10 %). While the economy does benefit from progress to some extent, this gain remains well below the one that could be achieved.

So what can we do? A better strategy is to tax consumption. This tax is paid by consumers regardless of where they get their income from and thus does not weight on their incentive to invest in productive capital. One may object that workers are adversely affected as they pay the consumption tax. This is not a problem however as what they pay is lower than the subsidy they receive to supplement their wages. The owners of capital on the other hand pay the consumption tax but get nothing in return. We thus have a redistribution from capital to labor but without any unpleasant side-effect on the incentive to invest.

What would such a scheme look like in practice? A simple way is to adjust the schedule of income tax to introduce a negative tax (i.e. a subsidy) for people with low incomes, who get their income predominantly from wages. This subsidy would be paid for by a value-added tax.

We have the policy tools to correct the impact of technological progress on income distribution. We should simply be careful not to do it via a tax on progress itself.

(1) If I work using a robot my productivity increases, and so does my wage. The cost of capital however remains constant. This apparently puzzling pattern reflects the fact that we can accumulate capital by investing, while no such option exists for labor. The higher productivity boosts investment, and the resulting abundance of capital keeps its price low.