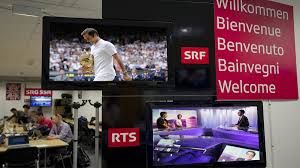 On March 4th the Swiss will vote on the “No Billag” proposition to end public financial support to radios and TV (Billag being the name of the company who collected the associated tax). The proponents wrongly consider that public money is not required to ensure the diversity of media. However a good quality of information is not delivered by a free market.

Information is a public good

“I only pay for what I consume” is a valid argument for most forms of consumption, such as a meal taken at the restaurant. An information of quality is however one of the activities that entail an externality: even if I don’t listen to the radio I am exposed to the views of my friends and relatives who do. Sure, this is not always pleasant, but it is much better than remaining locked in my bubble.

In the presence of such an externality economists know that the free market will lead to a suboptimal provision of services such as independent information. There is then a role for public support, a point that yours truly was already stressing a year ago with Jean-Pierre Danthine in the context of written media.

It is actually interesting that the proponents of No Billag make the parallel with newspapers to argue that accepting their proposal would not lead to much damage. After a year where we saw the disappearance of l’Hebdo (a popular weekly magazine), repeated restructuring in the French language Swiss press, and the shift of advertising income towards other platforms, the proponents’ argument is a strange one. Of course there are still newspapers in French speaking Switzerland, for now, but their future remains very much in doubt.

Paying for public services that one does not use is commonplace, as after all we benefit from the payment by others for services that we do use. It would not occur to me to object that part of my taxes fund primary school because I don’t have young children, or fund unemployment benefits because I have a steady job. I doing so I would conveniently forget that I did benefit from other people’s taxes when I was in school.

Fix it, don’t throw away

The SSR (Swiss radio and TV) and the system of the tax funding it are far from exempt from criticisms. For instance I always found that it would be much better to fund public support to media from the general tax base instead of relying on a company whose sole purpose is to levy that particular tax.

But the proposal does not propose any reform. Its text is crystal clear:

4- The Confederation does not subsidize any radio or TV outlet. It can pay for the broadcast of urgent official announcements.

5- No tax on media use can be levied by the Confederation or any third party mandated by it.

The point is thus not to rationalize the way we fund media or the mandate of the SSR, but instead to suppress any form of public funding. This amounts to throwing out the baby with the bath water. This is too radical a step: a good quality of information is much too precious a service in a country as diverse as Switzerland for use to treat it like a smartphone that we toss away as soon as it slows down.