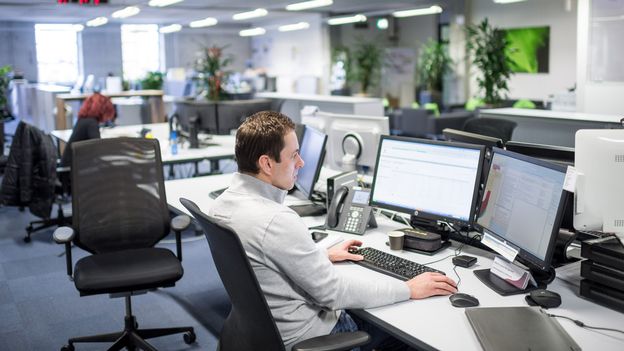 Swiss productivity growth has been anemic over the last ten years, as stresses in a recent OECD study. Should this situation persist, all the economic challenges of Switzerland would be even harder to meet.

Swiss GDP growth has unsurprisingly slowed in the last decade. While GDP grew by 2.8 per year between 2002 and 2007 the pace has since slowed to 1.4 percent. Of course, this is not so bad compared to our neighbors.

The drivers of growth have changed

The situation is more worrying if we consider the underlying drivers of growth, using the data of the Swiss Statistical Office. They are shown in the figure below which contrast the second half of the 1990’s, the years before the 2008 crisis, and the subsequent period. Similarly to a firm, the economy can grow in three ways: by hiring more workers (blue bars), by using more capital (green bars), or by making more efficient use of available workers and capital (red bars). This last driver, the so-called multifactor productivity, is the most favorable driver of growth as it is the key to a higher standard of living. 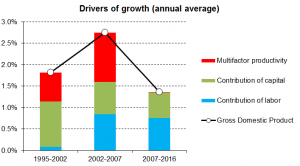 However Swiss multifactor productivity has been stagnating since ten years. In the second half of the 1990’s the economy grew thanks to investment and higher productivity, with higher employment also coming into play during the 2000’s. Since the crisis however, growth has relied only on investment and employment.

Higher employment is clearly welcome, but without additional productivity it only leads to moderate gains in standards of living. Had productivity kept its growth pace of 2002-2007, Swiss GDP would now be 10 percent higher with the same number of employed people.

Investment only offers a partial offset

A country standard of living is better measured by labor productivity – the ratio between GDP and employment – that by GDP itself. In the long run wage growth can exceed inflation only thanks to increases in labor productivity.

The weak productivity is a major challenge for Swiss economic policy in coming years. Problems such as the reform of the pension system or the weight of health costs are manageable in an economy with a healthy growth of standard of living, but become harder to handle when the economy struggles to generate the required resources.