The Swiss 2020 pension reform, put to a vote on September 24, will substantially strengthen the AVS (the pay-as-you-go component of the Swiss system) for 15 years, and the increase in benefits only has a moderate impact, which does not justify the focus of the reform’s critics on this point.

The pension reform is a comprehensive and complex package, and the detailed documentation provided by the Federal Office of Social Insurances (OFAS) is very much welcome to build a clearer assessment. Among other points, the documents show in details the impact on the AVS, which is particularly useful given the criticism of the increase of benefits from this component of the pension system.

A lasting strengthening of the pay-as-you-go

The two figures below show the projected paths of the AVS assets and its operating surplus (incomes – expenditures + earnings on assets) under the current system (red lines) and with the reform (blue lines). The message couldn’t be clearer. While the AVS will soon start eating in its assets to pay for benefits under the current system, the reform delays this stage by 10 years. During that time the wealth of the system will keep increasing and will remain sizable in 2035, even though the operating balance will then show a deficit. 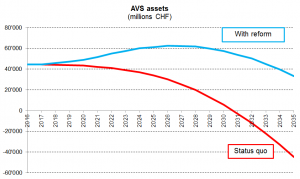 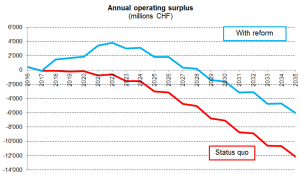 Of course, the figures show that the reform will not settle things once for all, and further measures will be needed in the future. Nonetheless, three points are worth stressing. First, the forecasts made in the past tended to be on the pessimistic side, and it is quite possible that things will turn out better than expected (of course, only time will tell). Second, the reform substantially delays the time at which problems will occur, which is valuable. Finally, the AVS could be strengthened in the future through relatively simple measures, a point discussed below.

The reform primarily operates through the AVS income

The OFAS figures allow us to see more in details how the AVS is strengthened. The figure below splits the impact of the reform on the operating surplus between income, expenditures, and the earnings on assets. We clearly see that the increase in the overall surplus (red line) is driven by higher income (green line). The earnings on assets also increase (blue line), a side benefit from the higher wealth of the system. These higher inflows into the AVS system are partially offset by higher expenditures (purple line).

The increase in expenditures remains moderate and does not constitute a strong headwind that would require substantial additional resources. 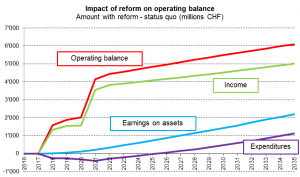 Where is the additional income coming from? Primarily from an increase in the value added tax (purple line below), and also from higher contributions by workers and employers (red line). The payments from the Swiss Federal Government will also increase a bit. 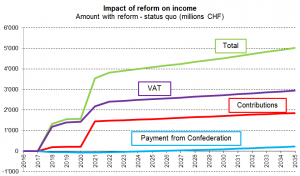 The increase in benefits only has a moderate impact

The additional expenditures are unsurprisingly driven by the increase in benefits (70 francs per month for individual retirees), which is shown by the red line in the figure below. This increase is substantially offset by a higher retirement age for women (blue line), which reduces expenditures. 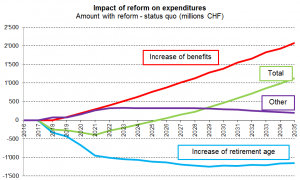 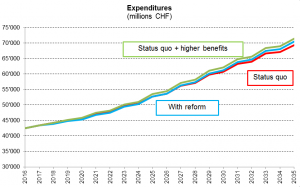 It is striking to see how close the three lines are (they would actually be very hard to tell apart if the vertical axis started at zero). This clearly shows that the reform is not a large gift to the beneficiaries of the AVS. The vocal criticism by the reform opponents on the higher benefits is not supported by the figures.

The AVS is not doomed by far

The projections by the OFAS show that the AVS can be put back on track for a sustained period with relatively simple measures. Of course, we will have to implement an additional round of adjustments in about fifteen years, but this is far from an impossible task (for instance the one year increase of the retirement age for half the population is enough to bring 1 billion francs into the system). There is no reason to take a catastrophic attitude and declare the pay-as-you-go system dead.