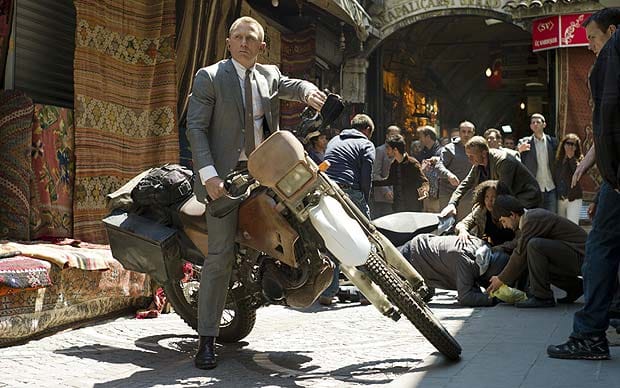 The lands of the politically-subaltern, Global South dweller have long been considered a playground for some Western visitors. This is a familiar lesson of Orientalism, and of tourism. What, however, is less often seen is how much of that Southern space and geography have historically constituted disposable scenery, both as regards real-life power dynamics and cultural representation. One such, by now, unconsciously-familiar, seemingly-trivial yet revealingly-powerful form is what we can here term the run through the bazaar or the storming of the souk (rather than the market chase) often witnessed in Hollywood action films or thrillers.

Typically taking the form of a chase through a crowded Middle Eastern or Arab or simply generically ‘Oriental’ market, this narrative vignette has been so ingrained in the visual legacy of Hollywoodian Orientalism that the viewer comes to literally expect it to play out sooner or later the moment the drama is set as such. Eventful, generally fast-paced — admittedly, fun — its outcome impacting the life or death prospects of the hero being chased or, alternatively, chasing the villain, the scene is nonetheless, in and of itself, a staple of how much the local reality is utterly secondary to the (fictional) story of the (Western) visitor.

From Alfred Hitchcock’s 1956 The Man Who Knew Too Much to Christopher Nolan’s 2010 Inception (both very good films in their dramatic respects), Marrakech to Mombasa, colonial to post-colonial, the matrix is the same. Faced with an impromptu challenge or acceleration of the plot, the story’s protagonists start chasing each other completely oblivious to the utter disruption they are causing and, in effect, behaving in all impunity and irresponsibility.

Generally, the local authorities are nowhere to be seen (or come too late and have no impact – just as real world local regimes are powerless in the face of Western powers), and the chase plays out undisturbed for minutes on — roaming through wide sectors of Casablanca, from market to street to highway, for instance, in Tom Cruise’s Mission Impossible – Rogue Nation (2015) where that North African city of millions is represented as almost ghostly.

In the event, the indigenous population is irrelevant, for it is either problematic in getting in the way of the righteous chaser or a nuisance if it starts preventing him from destroying their property. Dramatically, those shopkeepers are in effect represented in a way to be intuitively resented by the viewer who wants the hero to do whatever is necessary to escape the clutches of the villain or arrest him if the pursuit is the other way around. Inevitably, the viewer comes to share the hero’s irritation for any shop keeper slowing down the chase by trying to protect his shop. In Steven Spielberg’s Raiders of the Lost Ark (1981), the locals are passively sitting as Indiana Jones does that three times in Cairo – in the market, in the streets, and at a camp. In the sequel, Indiana Jones and the Temple of Doom (1984), the ‘fast streets of Shanghai’, are rampaged through from casino to airport by Professor Jones and his acolytes. In both cases, the disorderliness visited on the locals is not problematic – indeed it is amusing in a Tintin and the Blue Lotus kind of way – as it comes with a sense of entitlement.

The surroundings are in effect both an opportunity for chaos-creation and an invitation to do so given their nature. They are also so since the consequences to such behavior are non-existent. One scene that will not be seen is the admittedly logical next sequence of arrest of such public order violators. To be certain all chase scenes share that disregard for the urban environment but something about those taking place in an Oriental city transforms the relationship to the space and normalizes impunity. In William Friedkin’s The French Connection (1971) the New York streets and subway chase is subdued, performed discreetly by the protagonists trying to appear normal to each other, certainly, but also since the metropolis settings obliges them to a greater measure of restraint – the same local prudence observed in the Bostonian Chinatown neighborhood chase in Martin Scorsese’s The Departed (2006). And when the disruption is acknowledged (as in The French Connection‘s other car chase), the victims are humanized.

In contrast, in these films and series as seen in Taken 2 (2012) and Skyfall (2012) and Homeland (since 2011), the souk is a non-space, devoid of proper logics because those places cannot be put on a par, much less be allowed to imperil, the urgent needs of the Western visitor who unilaterally authorizes himself or herself to do violence to the local scene. Indeed, more insidiously, the… byzantine and labyrinthine nature of the souk is stealthily depicted as one whose very purpose is to provide a chance for deception (rather than, say, be a market for the local consumer getting his/her groceries). Echoing such ‘license to (k)ill’, the CIA-contractor character Matt Graver played by Josh Brolin in Sicario 2 – Day of the Soldado (2018) says to a Somali inmate he is about to torture in a CIA safe house in East Africa: “This is Africa, I can do whatever I want”.

Simply put, the storming of the souk is a metaphor for colonialism. Above and beyond a regular chase that could disturb any environment, the run through the bazaar is not mere entertainment decorum but ultimately a moment of Western interventionism in the South; a release moment characterized by impunity, violence, arrogance, and appropriation of space. That it has always been a normal feature of Western fiction set in the Orient is merely an indication that plus ça change…