“Live at home like a traveller.” I was not quite sure what Thoreau was on about in Walden until last week a big fat man came to our house in the Geneva countryside. His head was shaved up both sides and his heavily oiled black hair stood up straight. His shoes were pointed patent leather.

The gate was open and he walked right in. He surveyed the premises and declared that the wood trim of the house needed re-doing. Immediately. There were holes and cracks. Horrible things were obviously living there. We were neglectful and shameful owners. The value of the house was going down the toilet.

Fortunately for us, and most exceptionally, he was available for the next couple of weeks. And most coincidentally, he was a master painter with a gung-ho team. The job would be done quickly, neatly, and professionally. Yes. There would be a real paper bill for the tax man. They would use the best quality products. There was no down payment. What could possibly go wrong?

I think we were the victims of circumstance: Boredom, nice weather, the very shocking idea of standing high on a three-tiered ladder applying drippy, sticky product to cobwebby overhead lattes, magnanimously giving work to total strangers, trusting humanity. It all rolled together in a perfect storm of date-roll sweetness.

I mean, the very same thing happened to Eve in the Garden of Eden. At least I had all my clothes on. And the black-eyed man was truly golden-tongued. No amulet will be needed for him to speak to Osiris when he crosses to the afterlife.

He came back with a cousin the next day, and they worked a total of 4 hours. They sanded by hand. They applied a first coat. Unfortunately, the main wooden area—the ceiling over the porch—had not been included in the original estimate. The price would have to be doubled! And then there was the window trim that could not be left like that!

Sigh. Not of contentment. I bargained hard, and he bargained harder. A team of 3 came on the second and last day and finished in about 6 hours. I said hello to the fat man’s two little girls on his telephone. The workers spoke a language among themselves and when I asked what it was, they all stared at me. The fat man gave me a cryptic answer that generations previously, his family had migrated from Northern India. There was silence. No one breathed a word. 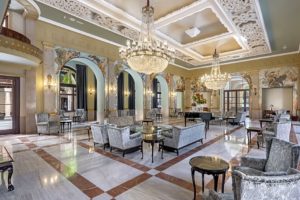 As lemonade was served later, he expanded his dialogue by telling me he was extremely religious. I didn’t fall into THAT trap and kept my big mouth shut. He added, “But, Madame, you know that even religious people can be bad.”

They left vowing that they would be back to paint the whole house as soon as possible, and wanted to come to the Shack in the mountains to fix that up as well. Our denial of all future business transactions rolled off their Romani backs like water off a duck.

Oh yes. We did go on a real trip recently – to Gran Canaria. It was windy and cool. The old Santa Catalina Hotel was newly refurbished and very charming. We visited the great volcanic craters and were on the last direct flight back to Geneva.

That week-long trip cost about half what we paid (cash, of course) to the fat man.

To live at home like a traveller is exciting and all, but we can’t afford to do it permanently.

One thought on “Quiet Desperation”