Waiting rooms are not nearly as much fun as they used to be. Back in pre-pandemic times they were places of energy and human interest. Doctors would over-book with abandon, and you’d find yourself cheek by jowl with organized / harassed women phoning in supermarket orders and making arrangements.

The ophthalmologist’s was a very thoughtful place, as most printed matter was banished. Glossy vacation and architectural magazines ruled.  It was there that the old lady from the Valais was heard loudly complaining about the shocking smell of papist fish in the air on a Friday.

At the dentist’s I was treated to the sight of my normally-terrifying high school principal reduced to a trembling wreck as the grandfather clock ticked. I was never scared of him again.

There used to be reading matter—tattered and torn magazines with the crosswords filled in and the recipes ripped out.  If you were lucky, a grubby copy of today’s paper. Sometimes a little heap of free samples—skin creams and tooth whitening brochures. Boxes of paper tissues.

At the emergency room of the nearest clinic, there was a small wall-mounted TV with hyenas chasing, catching and eating a wildebeest. This ran on a 20-minute loop. I think the title was Magnificent Mother Nature—obviously some sort of medical in-joke.  We the sickies were always captivated and our problems were reduced.  I’m sure some people, ashamed of their insignificant severed finger(s), even left. 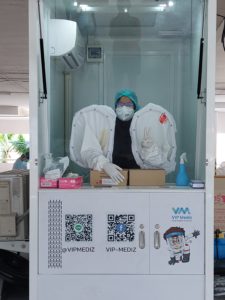 With one thing and another, I have visited quite a few waiting rooms over the past few months, and I shake my head with sadness.

There are the hospital business visits where you fill in forms, sit on every second white plastic chair, get tested or vaccinated, and pay on the spot. (This is very Japanese-style where the waiting-room is arranged with church-pews all facing the same direction. In case of death, this can suddenly turn into a highly emotional public wake.)

There are new, fancy state-of-the-art waiting rooms. At the dermatologist’s there is a huge screen which gives “before” and “after” shots of various skin and wellness procedures. This becomes confusing, as often you cannot tell which is which. The weights around your waist to reduce belly fat, and the dancing sewing-machine-like needles on the face have both resulted in lasting mental damage.

I can confidently report that dentist, gynecologist, and GP waiting rooms are now socially dead. You occupy the room alone due to the well-spaced appointment schedule. Nothing to read. Nothing to watch. No one to listen to. Nothing to be learned. No tubes to squeeze.

So I look back fondly to last month when I found myself in a second-level parking lot in the once-raucous Thai tourist town of Patong. There were crowds of tourists needing their COVID tests.  In the breezy open concrete space there were line-ups, jostling, mistakes, laughter, shouting and confusion. The lady doing the tests was in a hermetically-sealed box and her gloved hands stretched into the voids of our waiting nostrils.