There have long been horses in the Vallée du Giffre[1]. They have been used to pull hay wagons, to plough fields, to clear forests, to transport wood. With fingers of time even reaching into our present lives, it was Roger Mullatier’s horse that dragged our cast-iron Godin heating stove, our beds, and tons of lumber up the mountainside on an old carved wooden sled.

Remnants of the past live on in the Vallée du Giffre.  On a Monday morning in late June 2021, an itinerant farrier was parked in front of the old bell-topped schoolhouse at the bottom of our mountain road. His van door opened onto a shiny metal machine studded with dials. This was his heating oven—a propane driven forge furnace powerful enough to turn iron red-hot. 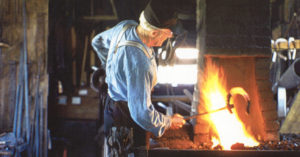 Various horses were waiting quietly. Donkeys were being tied to a railing along the road; a huge black feather-legged draft horse was looking on from a distance; and around the corner a couple of big chestnuts and a group of mottled ponies had all arrived.

The farrier’s trade is pre-industrial. The Romans protected their horses’ hooves with hipposandals – first made out of leather and then out of metal. The Gauls were probably the first to use metal horseshoes with nails (5th century). And since then all but the wildest mustangs have metal attached to the bottoms of their feet.

The farrier’s vocabulary is medieval and magical. There are leather aprons, hammers, nippers, clinchers, pullers, cutters, rasps, knives and hoof picks--all unique to the farrier’s trade.  I was charmed with the slice of antiquity suddenly presented.

An hour’s drive took us back to the real world of the Geneva countryside. End-of-the-month bills needed paying and my Crontosign app demanded an update. Netbanking was not letting me through. I was going to go to jail.

I finally had to phone the emergency hot-line-for-dummies number.  The nice young man spoke English and asked me for my contact number. And it went downhill from there. Passwords, Google play-store, scanning, capturing, the initial bank letter, receiving an SMS and transferring the number into the bank system. Three machines were needed simultaneously: computer, mobile phone, land line.

The nice young man grew tetchy, and at one point asked if I knew what an app was? I told him no. It was finally established that my mobile phone was too old to install the update. My initial bank letter was also too old. (They are both 4.)

He kept muttering “don’t panic”. I couldn’t figure out if he was talking to me or to himself. We finally managed to fix it, but his last warning to me was to NEVER uninstall the sucker as it was totally unrecoverable by mere humans.

Sigh. Give me an honest hipposandal any day.