Well, the fuss seems to have died down after Canadian family members have all given each other DNA testing kits (and home-grown cannabis) for Christmas. In one intransient case, the 99.99999999% proof has not been accepted, which is at least some sort of thread into the future. Blackmail, murder, guns and lawyers are all exciting possibilities.

Living through a pandemic makes us doubt even the obvious. My sister, for example, is talking about having all three of her adult kids tested, as she’s come to the recent conclusion that they’re not hers. This pseudo-medical procedure is obviously popular, for not only does it add a frisson of excitement to clogged and claustrophobic family life, but is a positive act of doing SOMETHING. It is a stand against the static frustration of watching, night after night on the evening news, everyone (except us) getting a jab in the arm.

As we can’t see the future, we are looking into the past. Last year at this time we were in south-eastern Sri Lanka. We rode in the bone-smashing back of jeeps with no suspension to see the deer, elephants and birds of the national parks. We ate freshly caught fish at the Lucky Star Villa. We were swirled through the blue smoke, the nasty monkeys, and the seething humanity of a Hindu festival. We stayed at the Cinnamon Villa where we longed for cold beer and dental floss. We revisited a time and place when the tsunami of December 26, 2004 wiped out the entire coast. We survived that one by the skin of our teeth. 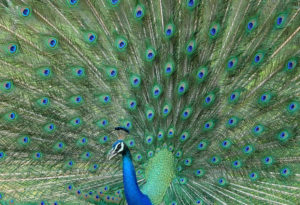 In this particular bleak midwinter, we look at great offers of hotels with restaurants and swimming pools, and castles, and coastlines, trying to plan travels in a post-vaccine world. It stutters forward somewhat. There is doubt and powerlessness. Cancelled trips do not make great stories.

We eat curries and sushi and Mexican beans and sweet and sour pork. We remind ourselves of what we know and where we have been. We are, uncomfortably, living in the present. It is a silent and still place.

This was reflected yesterday in a cut-price supermarket that I don’t normally visit. It was empty except for a handful of staff cutting open cardboard boxes to display the contents. The little mall was dark and grim as the clothing stores, the pet food store, the shoe store, the café, the junk jewelry store, the nail salon, were all closed. I never go into these places, but I wanted them open. Tables and chairs, usually occupied by the old folks in the retirement home were all chained into ugly heaps. No sitting allowed.

I bought a new frying pan (that being the reason for my visit), being pleased and surprised that it was considered an “essential” item. I will fry up some Tupperware left-overs for lunch.

After that, I am thinking of getting a DNA kit to check out whether I am who I think I am.