I know exactly where there is a Confederate flag on public display just over the border in France. It is nailed to the wall of a seedy bar/restaurant that changes ownership regularly. The establishment is at a crossroads of two mountain valleys and the site was once of vital important to the Dukes of Savoy in the 15th century.

It is now important to almost no one. The pub sports a perpetually “open” sign and is usually closed.

The flag is a relatively recent addition. Decades ago, before they got the flag, the place was a rowdy truck stop where you could get a not-bad 3-course hot meal and a jug of red wine for 25 French francs.  You sat with your back against the wall, and it was the closest thing I’ve seen in Europe to a Montana Saturday-night fist-fighting bar.

These days, there is a huge Harley-Davidson motorcycle gathering in the valley every summer, and the large Confederate flag seems to serve as an enticing element to try to attract the wild spirits of the grey-pony-tailed French motards to come in and drink a can of pop.

I suppose it’s a really bad thing, but I’m also pretty sure that everyone around here thinks it’s just another piece of foreign (American) junk cluttering up the countryside and of little real relevance. I mean, we have much more important things to worry about, such as getting the speed limit permanently back up to 90 kph on those steep and windy mountain roads.

And I don’t think anyone has Facebooked it and turned it into a galvanizing political issue as has happened in my sister’s town in southern Ontario.

In case you’ve missed all the drama, Stratford, Ontario, home of the Shakespeare Festival, has been called out for having red-necked racist elements lurking in it, as an actor (they’re not busy working as usual because of COVID19 this season) photographed and posted on social media a Confederate flag on display in someone’s front window. 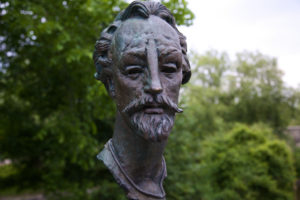 Displaying flags or symbols is not against the law in Canada, but can be rather outrageous, to say the least. Canadians, by the way, LOVE their national flag, and it is displayed loudly and proudly all over the place. I can only conclude that it must be an American who lives behind the offending Confederate window display. He/she might even have a Harley—or at least wish for one–and aspire to attending the next H.O.G. Rally in the French Alps.

Of course, the overwhelmingly liberal and culturally-intellectual population of Stratford is appalled at being painted racist pigs for the whole world to see, and the last I heard my sister was organizing a demonstration to push over the head of Shakespeare in the Shakespeare Gardens in protest.

Without the magical distraction of the theatre this year, everyone has time on their hands to get into trouble. Falstaff would love it.