Following in the old family tradition of hiking with the friendly help of buses, trains, and one-armed car-drivers, this Easter holiday we set off from the south-west corner of Switzerland to revisit the apple blossoms of the north.

It started well with dawn’s rose-red fingers lighting our way to the village bus. This connects conveniently to the commuter train into Geneva’s main station. Schadenfreude overwhelmed us, as a commuter, dressed in his banking clothes, raced madly down the hill past the vines to catch our train.

Five hours later, and restored by a light lunch at the Trauben Inn of soup, salad, liver, bärlauch gravy, sausages, rösti, and a child-sized bottle of pinot noir, we set off north, over the Ottoberg Mountain to the shores of  Lake Constance.

We were a small group of three, but our intent was clear: backpacks, cameras, binoculars and spare socks defined our touristic ambitions as we toiled up the steep slope, breathlessly admiring gardens and trees, past the Schloss, through the forest, to the little bench at the top of the hill where you could sit and admire the Appenzell Alps and the Säntis to the south.

Unfortunately, to the north, the expected Lake Constance was nowhere to be seen. Instead there were hills rolling off into the far distance, church spires and clean cows munching alfalfa.

At this point our tour leader came in for some rather sharp questioning and it turned out that when this route had been previously travelled, at the age of 14 with a bicycle, the distances were much shorter. The youngest member of the group lay down on the asphalt road, said she couldn’t walk anymore and demanded a caramel. 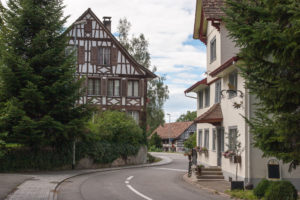 We set off for the closest church spire speculating that there would be a village bus that could get us to a train that could get us to the lake. We admired the huge tractors were parked at the front doors of houses. A farmer, digging post holes, chatted in his sing-song guttural language about the April heat and lack of rain and how he could only get one cut out of the grass he was growing on his north slope.

Winding and digressing lanes took us down to Hugelshofen–a village of many cars but few people.

And this is how we ended up sitting, quite happily, in the Thurgau countryside across from a closed restaurant with apple blossoms swirling around our heads, breathing the heavily manure-perfumed air of the landwirtschaft. Cars slowed down to stare at us. We drank the possibly-poisonous but cooly-delicious water from the fountain. We admired the inventive children who had built a ladder of kitchen chairs to climb a tree.

For me, that hour at the bus stop was the highlight of the trip. A stranger in my own country, muscle-sore and weary, waiting to be rescued by a bus.