There is something disarmingly wrong when there are earplugs instead of chocolates on your hotel pillows. This was not the case in the cosy little family hotel at the top of the Simplon Pass last week. The regulation miniature Toblerones were perkily propped on their feathery mounds.

We were on our way to Italy, fleeing the cold flat grey winter of the Geneva countryside. We had images of 15th-century frescos, baroque churches, duomos, termas and the Mediterranean dancing in our heads, and to have properly deserved their Latinate luxury, the leaving of Switzerland over the grim Simplon seemed dramatically appropriate. 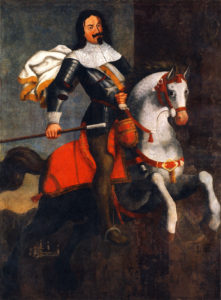 The Simplon Pass (2006m) is open all year round, but in the winter you can see almost nothing from the road due to the huge mounds of ploughed snow and ice piled high at the edges. You have to be very clever and brave and turn off into unmarked cleared areas to see Kaspar Stockalper’s monumental buildings that he used to stock his merchandise—mostly salt—being transported over the pass. He was a sort of 17th-century Donald Trump—an extraordinarily rich bully with a castle in Brig and big plans to make money from the rest of the world. He got so annoying, that he was even kicked out for a time.

What is visible, thought, at the top of the Simplon is the gloomy giant granite eagle, built by the Swiss troops during their stay there during WWII to (successfully) scare both the Germans and the Italians away.  History is in the air.

The evening started well, and local generosity included wines from the Upper Valais and a chicken cordon bleu about the size, thickness and colour of a bible.

Then there was night.

In a proper Swiss hotel room, the duvet is the most crucially meaningful feature. At a mountain hotel, the duvet is king. It is very thick, very light, and could possibly protect you from the rigours of the South Pole or outer space. You must position your limbs so that they are half-in, half-out and hope that your body and brain figure it out.

This didn’t happen, and so after the heating was experimentally turned off, it was agreed that the window should be opened. The cold mountain air slipped in.

However, so did other things. In the village there is a humble stone bell-tower. In the day time, I swear, it sits silent. At night, it chimes every quarter hour, and then changes to a bell-tone down an octave to sound the hour. I must admit, I missed both the 1 and 2 o’clock bells, but enjoyed them all after that until the 6 a.m. frenzy of frantic bell-ringing in the alpine darkness. This, it turns out, is not a village fire alarm, but a signal for you to get up to pray.

I had never before quite understood Napoleon’s rather negative attitude towards churches. Simplon might have been my epiphany.